Fleece to Fashion: Economies and Cultures of Knitting in Modern Scotland 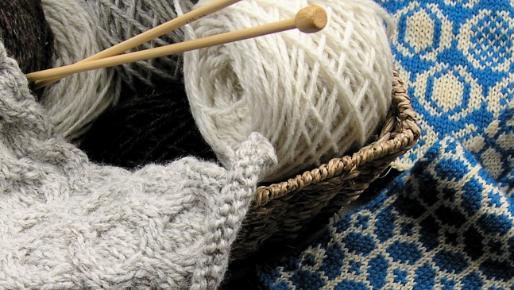 Fleece to Fashion: Economies and Cultures of Knitting in Modern Scotland.

This 3-year AHRC funded research project makes an original and timely contribution to knowledge of knitted textiles in the Scottish context at a moment when the creative economy sits firmly within Scotland's economic strategy.

Following the production cycle from fleece to fashion, the project interrogates why and how knitting has adapted to and survived modernisation to become a distinctive heritage brand in the modern Scottish economy and culture. Today, production of knitted textiles makes a vital contribution to the Scottish economy (textiles are second only to whisky in their export and recognition value) ranging from wool production to designer fashion and incorporating: sheep husbandry; spinning and dying; design and production of cloth and clothing; textile tourism; and retail.

Throughout the 3-year project a variety of engagement activities will take place, including a conference, makers workshop and more. Information on upcoming activities will be added to this web page.

Our project partners include:

Lynn Abrams is Professor of Modern History in the School of Humanities at the University of Glasgow. Her research has focused on women and gender relations since c.1750 in Britain and Europe and on oral history practice and theory. Her interest in knitted textiles was sparked by research on women in Shetland, published in Myth and Materiality in a Woman's World: Shetland c.1800-2000 (Manchester 2010) which led to a series of RSE funded workshops and a network on Scottish knitted textiles. She is currently writing a book on postwar womanhood in the UK which includes the study of changing fashions and textiles in the 1960s. Her past publications also include The Making of Modern Woman: Europe 1789-1918 (2002); Gender in Scottish History since 1700 (2005) and Oral History Theory (2016).

Sally Tuckett is lecturer in dress and textile histories at the University of Glasgow. Her research has focused on the clothing and textile cultures of eighteenth and nineteenth-century Scotland, working closely with museum and archive collections. She has published on national identity and dress in the eighteenth century, and Scottish textile cultures including Ayrshire whitework, tartan and the Turkey red dyed and printed cotton industry. Her current work is looking at the links between Scottish linen production and clothes of the enslaved in North America.

Roslyn Chapman is a research associate on the Fleece to Fashion Project at the University of Glasgow. Her PhD thesis was on the History of the Shetland lace knitting industry in the eighteenth and early nineteenth century and although she has researched knitted textiles in other regions, her focus has remained on Shetland. She has recently collaborated with Dr Carol Christiansen, textile curator at Shetland Museum and Archives on the RSE funded Nottingham Shetland lace project, and the AHRC funded Digitisation Strategy for Shetland Museum’s Recognised Textile Collection.

Lin Gardner is a post-doctoral research assistant for the project. She recently completed an AHRC-CDA funded PhD titled, ‘Mechanising the Needle: The development of the sewing machine as a manufacturing tool, 1851-1980’. Her research used both archival sources and material culture to explore the impact of stitched object construction and human tacit skill on the development of mechanised production. Lin initially trained as a woven textile designer at the Glasgow School of Art. And after a short time working in the Scottish woollen industry, she was a professional costume maker for theatre, film and television. 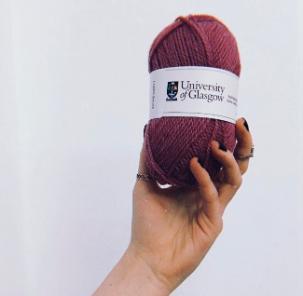 The University of Glasgow has created its own brand of knitting yarn made with wool from sheep reared on its own farm.

Cochno Wool is a single-origin double-knit, worstead spun yarn, sourced from the Scotch Mule and Aberdale sheep flock at the University’s Cochno Farm.

The venture has been part-funded by the University’s Chancellor’s Fund. The ball band design features the Cochno Stone, a Neolithic stone with cup marks located in the vicinity of the farm near Clydebank.

A pattern book is now available, with designers across Scotland contributing their designs for a range of knitted items inspired by the architecture of the University of Glasgow.

Buy University of Glasgow Wool and the book from our University Shop website.

This event shared knowledge and practice regarding the collection, conservation, preservation and interpretation of knitting collections

Knitting is often a hidden part of a national or local collection, yet given the importance of knitted textiles to the story of Scotland, it is imperative to raise awareness and share information and knowledge so that garments which carry so much meaning are appreciated, preserved and interpreted. We know that while our national collections may have specialist curators, many other smaller museums and collections do not. This colloquium will share knowledge and practices amongst curators and custodians.

Presentations addressed a wide range of issues including: the traceability, identity and emotional investment in knitted garments; acquisition and display of knitted textiles; the care and conservation of knit collections; the challenges of interpreting knit collections for diverse audiences. There will be time for questions and discussion.

While we are unable to host you at the University of Glasgow, this online format allowed us to welcome participants from further afield than would have been possible. 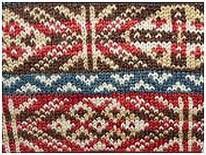