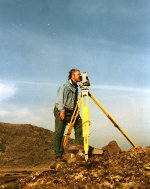 The Riu Mannu survey aims at examining the development of socio-political organisation in Sardinia from the earliest occupation of the island in the 7th millennium BC until the Middle Ages. In doing so, it combines two complementary points of view: in the first place, a methodological one in which the basic question is how socio-political issues can be studied archaeologically; and secondly a specific one in which developments of rural settlement in west central Sardinia are examined with respect to (proto-)urban centres in or near the region. In contrast to the monumental focus of most prehistoric archaeology and the urban focus of classical archaeology, the Riu Mannu survey has adopted an explicitly non-monumental and rural or landscape-based approach.

The Riu Mannu survey was set up in 1991 at the Department of Archaeology of the University of Leiden (the Netherlands) by M. Beatrice Annis (Rome), Peter van Dommelen (Glasgow) and Pieter van de Velde (Leiden). Since 1997, it has been carried out in collaboration with the university of Glasgow. Between 1992 and 1999, seven fieldwork campaigns of about six weeks have been carried out as well as one study campaign (1997). Analytical studies of the finds, both pottery and obsidian, are currently in progress at the University of Glasgow.

Vital support for the survey was lent by dr. Vincenzo Santoni and dr. Carlo Tronchetti of the Archaeological Service for the provinces of Cagliari and Oristano, while the local council of Gùspini has provided invaluable logistical support in Sardinia. The fieldwork and analytical studies have been sponsored by the universities of Leiden and Glasgow (Robertson Bequest), the Netherlands Organisation for Scientific Research (NWO), the Carnegie Trust for the Universities of Scotland and the British Council.

The study area of the Riu Mannu survey is situated in west central Sardinia, covering approximately 30 x 35 km. It comprises the three major landscapes of the island, which are the mountains, the plains, and the coastal wetlands. Intensive field walking and data collection was carried out between 1992 and 1999 in seven campaigns of six weeks, resulting in the intensive coverage of 25 transects with a total length of approximately 79 km.

The outcome of the Riu Mannu survey regards the fieldwork in the first place, as it has been concluded in 1999). The fieldwork techniques in particular have been the focus of a series of analyses and evaluations, because they differ substantially from conventional field walking along parallel lines: especially designed to allow detailed and quantifiable collection and documentation of off-site finds, they basically consist of the point-by-point collection of finds. They have proven to offer an efficient way for overcoming the most common problems of archaeological visibility, while providing a rigorous collection of off-site finds across the landscape (van de Velde 2001).

In the second place, the fieldwork results have been analysed at site level with regard to the regional settlement patterns for the Classical (Punic) and Roman periods, as the remains from these periods are particularly abundant. The principal find-spots of these periods have been analysed in some detail, in particular the remarkably dense cluster of small rural settlements in the coastal area on the Bay of Oristano. In accordance with the project’s second goal, this evidence has subsequently been used to discuss socio-political themes such as rural organisation, Carthaginian colonisation and romanisation (van Dommelen 1997; 1998; 2001).

In the third place, important results are now forthcoming from the (ongoing) analytical and technological studies of the finds. These are essentially made up of pottery (80%) and obsidian (20%).

The ceramic studies consist in the first place of a conventional typological classification of the better known object classes such as amphorae and fine wares like Black Glaze and African Red Slip wares. Most of the larger finds concentrations in the coastal area that date to the Classical and Roman periods have preliminarily been examined in this way in order to create a diachronic overview of rural settlement in the study area.

Secondly and most significantly, the ceramic fabrics of all the finds from two transects in the coastal area (02 and 07) have been analysed technologically in order to gain an insight in the characteristics of regional ceramic production in the Punic and Roman periods in relation to the studies of long-term traditions of pottery production and exchange. Additional analysis of clay samples from the study area has confirmed the identification of the two most common fabrics as local products. The most significant outcome of these analyses is that remarkably large numbers of amphorae were locally produced in the Punic period. It has also singled out a number of likely extra-insular imports as well several products that probably stem from other Sardinian regions (Annis 1998).

After two successful pilot studies, the obsidian finds are now the subject of a comprehensive Ph.D. study in Glasgow by Natasja de Bruijn (submitted in 2006), which examines regional patterns of obsidian procurement and use, as the study area includes the Monte Arci, which is one of the major obsidian sources of the western Mediterranean.

The published output of the project since its goals were first formulated in 1991 now consists of one monograph and 14 papers in journals and edited volumes in English, Italian and Dutch.

In addition, an exhibition about the aims and preliminary results of the fieldwork has been organised in Sardinia: set up in the villages of Montevecchio, where the project has been based during the fieldwork campaigns, and subsequently in Villanovaforru, it has been on display during 2001 and 2002. The displays have since been developed into a digital exhibition under the title Alla ricerca del mondo rurale nella Sardegna antica.