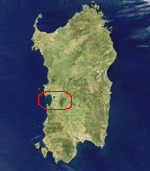 The Terralba Rural Settlement Project was established in 2002 as a long-term endeavour to investigate the nature and distribution of rural settlement in the Terralba district of west central Sardinia and to explore its connections with both the indigenous traditions of Sardinia and the wider colonial network of the Punic world. Initiated by Peter van Dommelen as a project at Glasgow University, it is now carried out in close collaboration with Carlos Gómez Bellard of the University of Valencia.

Two general key publications on this topic are

At the site of Pauli Stincus (Terralba, Sardinia), a rural settlement of Punic and Roman Republican date (4th - 1st c. BC) has been excavated in 2010. See here for a report from the field.

At the site of Truncu 'e Molas (Terralba, Sardinia), a rural settlement of Punic date (5th - 2nd c. BC) was excavated in 2007. Analysis of the faunal and botanical remains and study of the finds have been completed in 2008 and 2009.

Eight rural sites of broadly Punic date (5th - 1st c. BC) were intensively investigated in the Terralba district of west central Sardinia in 2003 and 2004, using systematic surface survey, geophysical prospection, test excavation and ceramic and spatial analysis of the finds.

The nature and developments of rural settlement in west central Sardinia from the Neolithic to the Middle Ages were intensively and systematically investigated between 1992 and 1999.