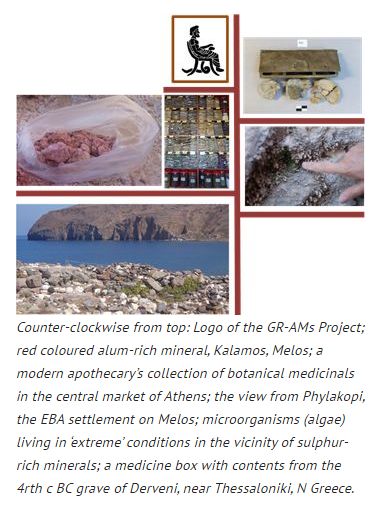 ‌Over the last 20 years there has been a revival of interest in the Earths of the Aegean, the layered silicates, sulphur/sulphate minerals or metal oxides referred to in the texts of Galen, Dioscorides, Scribonius, Celsus and other authors of the Greco-Roman world.   See our project Earths of the Aegean. In the last three years, and with the significant  contribution of colleagues in the UK (microbiology), Greece and Italy (geology/volcanology), the focus of research has turned to the testing of these minerals for their antimicrobial properties. (See our publications below).

The Greco-Roman Antimicrobial Minerals Project (GR-AMs) funded by the Wellcome Trust (Seed Award in the Humanities and Social Sciences) has now taken this research to a new level. Rather than focusing exclusively on the minerals, the project sets out to investigate minerals, minerals-rich waters and muds within specific natural and cultural landscapes (mines, quarries, workshops). In particular, it focuses on the intriguing and largely under-investigated relationship between minerals and microrganisms (bacteria, algae and fungi) which share the same habitat, be they volcanic vents, mine galleries or mudpools; it asks the following question: does the antimicrobial activity of some G-R minerals or muds derive from or is associated with the presence of microbial life?

Beyond the study of the ‘therapeutic’ landscape, the GR-AMs Project also proposes to investigate perceptions about the nature, method or preparation and effect of medicines by ancient practitioners (doctors, healers, writers, priests) through documents and the archaeological evidence (material culture associated with burials). By examining the nature of the contents of vials with ‘medicines’, found in a number of 4thc BC-2ndc AD burials in N Greece, it seeks to juxtapose the documentary and the archaeological evidence. Are there 'medical prescriptions' in the ancient texts which reflect the contents of these vials?

The GR-AMs Project examines minerals and muds largely from volcanic landscapes and for the nature and presence of microorganisms within (following culture and DNA sequencing). It carries out geological/ volcanological/ mineral/ chemical/microbiologcal investigations. In the process we aim to illuminate aspects of the antibacterial/ antifungal properties of the Greco-Roman pharmacopoieia, hitherto unexplored.

E. Photos-Jones, Proceedings of the 6th Symposium of the Hellenic Society for Archaeometry (2016)

Aspects of Ancient Mining and Metallurgy - Acta of a British School at Athens, Centenary Conference at Bangor 1986