The Transcript of the Prehistoric Rock Art Debate in Scottish Parliament, 19 February 2020

Scotland is famous for its prehistoric abstract rock-art, and when we think about such sites, we usually imagine a rugged cupmarked boulder on a Highland hillside, or a grey outcrop covered with cup-and-ring marks within a forestry plantation or a field. However, some rock-art in Scotland has a more urban setting. 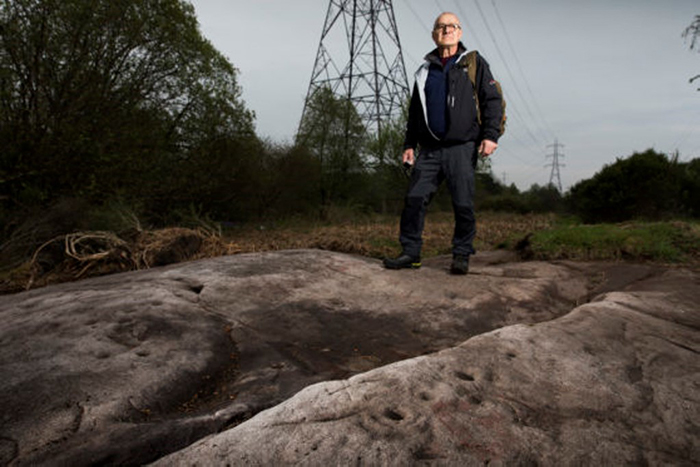 Gordon Morrison standing on one of the Auchnacraig rock-art panels at Faifley (photo: Sunday Post)

Since 2015, the archaeology department at the University of Glasgow has been working with local community members and organisations in Faifley, Clydebank, West Dunbartonshire, to explore the social benefits, and community value, of some amazing prehistoric rock-art sites. Local people have decided to call this project Faifley Rocks!

Using as the leaping off point a series of prehistoric rock-art outcrops on the urban fringe of Greater Glasgow, this is a project that aims to help to change the lives of people and their environment in Faifley and Clydebank for the better. These rock-art sites are outcrops of rock that had cup-and-ring mark symbols carved on to them up to 5,000 years ago. The biggest example, the Cochno Stone, has over 100 symbols carved onto it and is of international significance. But it also has emotional value to people who live locally or who grew up in Faifley, even although it was buried in 1965 by the heritage authorities.

This prehistoric archaeology has given us the chance to work with the local community in one of the most deprived areas of Scotland (using current SIMD data) and in partnership with Knowes Housing Association, Faifley Community Council, West Dunbartonshire Council, and other organisations. 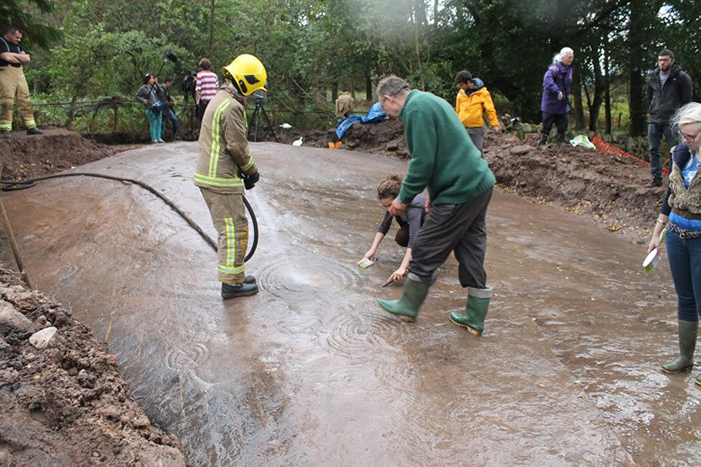 The Cochno Stone surface being cleaned by a local firefighter during the 2016 excavations (photo: K Brophy)

The catalyst for this was the complete exposure of the Cochno Stone in 2016 for the first time in half a century. The excavation here seems to awaken a lot of interest locally (and beyond) in the rock-art and reignited memories of those in the community who had played on the stone, even carved their name on it, as children in the 1950s and 1960s. The Cochno Stone was buried in part because antiquarian Ludovic Mann had covered it in oil paints in 1937, and in part because so many visitors carved their name onto the stone after that. This is probably the most vandalised prehistoric monument in Europe! This is a place that people have long wanted to leave their mark upon, a process that started 5,000 years ago. 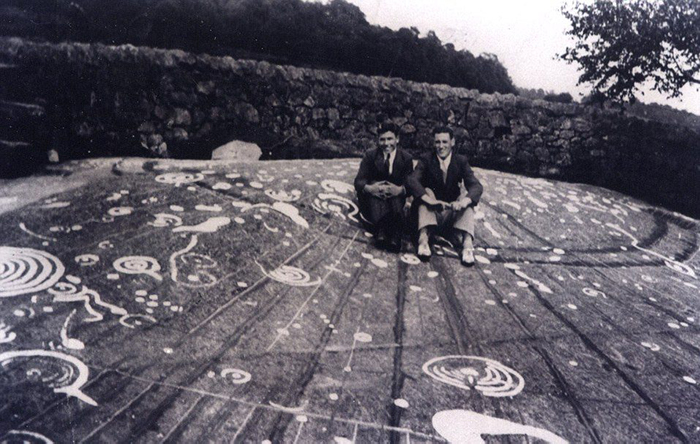 Two young men sitting on the Cochno Stone before its burial in 1965. The white markings were painted onto the stone by Mann in 1937 © West Dunbartonshire Council

This massive rock outcrop with hundreds of carvings spanning five millennia was digitally recorded by Factum Arte and the HES Digital Documentation team before being buried again, giving us a powerful dataset to work with in the future. Research has already been undertaken on Mann’s paintjob, and Alison Douglas has studied the historic graffiti. Since then, things have snowballed. The project has included excavation around other rock-art panels, survey work and training with Scotland’s Rock-art Project (a HES project), workshops, talks, consultation events, exhibitions, and lots of school activities. This includes workshops based on a Cochno Stone comic book designed by artist Hannah Sackett, working with the new Clydebank High School Archaeology Club, and developing resources for working in schools and nurseries. 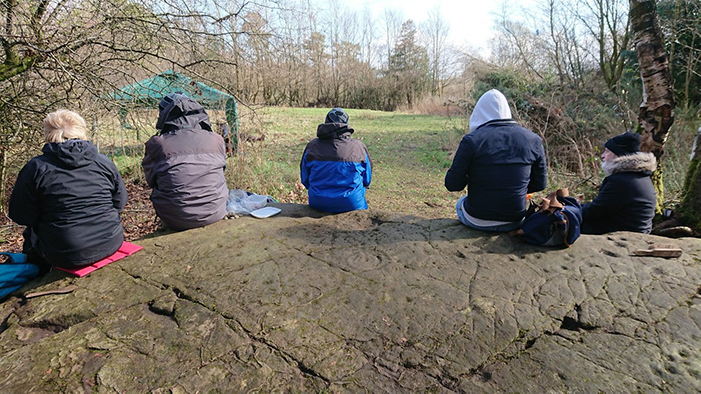 However, there is so much more than education and training to this project, with the social benefits of rock-art explored in a Scottish parliamentary reception and debate in February 2020 for instance. 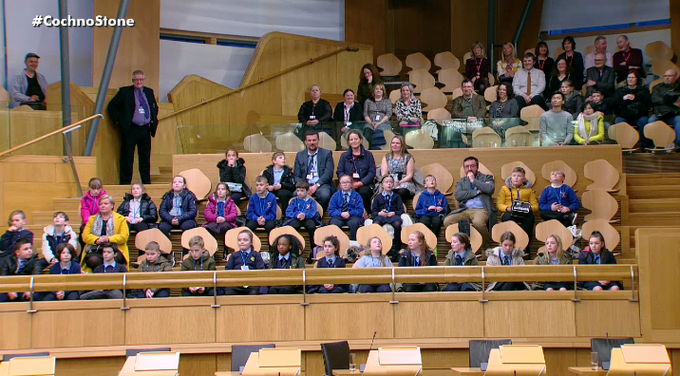 The reception after the debate was an emotional event with a wide range of people talking about their experiences of the rock-art, including teachers, community members, archaeologists, and school children. This brought home the potential of deep time and heritage to bring people together. 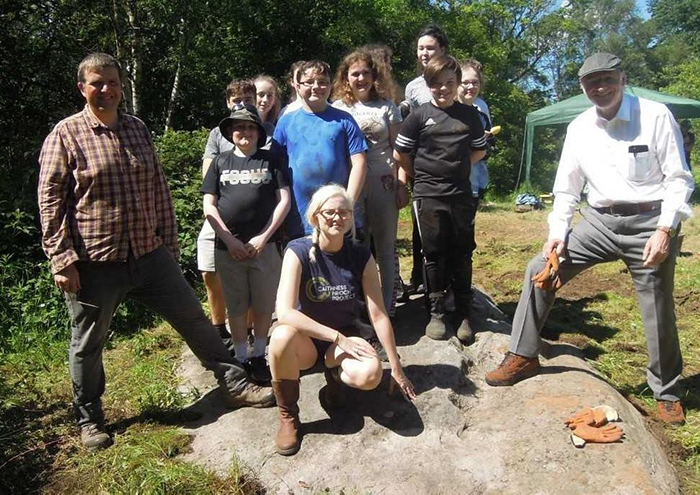 What is really exciting about Faifley Rocks! is the chance to work with people from an informed local community, some of whom are passionate about the Cochno Stone and rock-art, and inspired by the what the future might hold. A recent survey by Knowes Housing Association of over 700 of their residents showed less than 10% knew nothing about the rock-art. Over 250 respondents agreed that ‘the rock-art should become an important part of Faifley’s future’ and a similar number thought that more information and walking trails locally would be a good way to bring the rock-art to more prominence. There is a huge opportunity here, and having a mobilised, informed, and eager local community is hugely exciting. 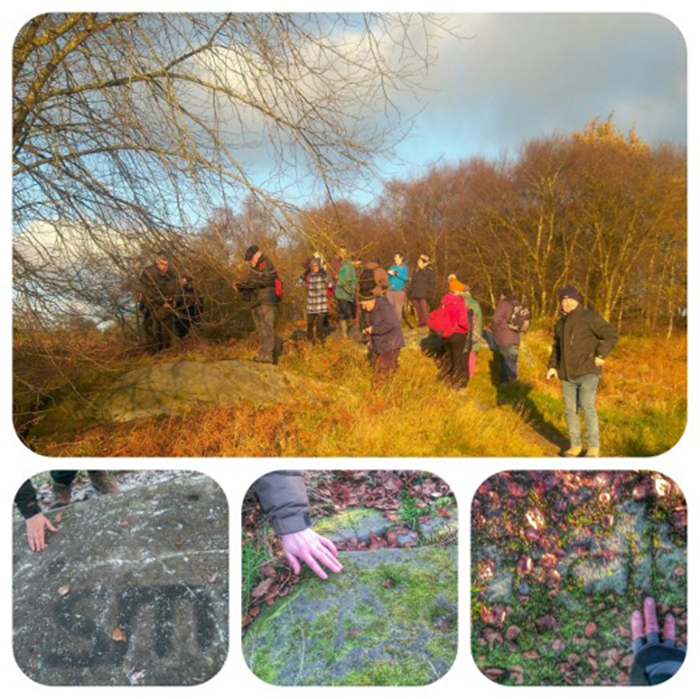 Faifley Rocks! is a project very much in the spirit of engaged archaeology. The focus of the project is not really prehistory, or the carved stones, amazing as they are. Rather, this is about the people and about the place, and the hopes that something special can come from the presence of a previous heritage resource within this urban community. More excavations and survey work will follow, drawing on the expertise of local people in the rock-art and the places that they live, and more will happen in the schools as well. The objective is to re-brand Faifley as ‘Scotland’s rock-art capital’ and use urban prehistory as a force for social change.

The Transcript of the Prehistoric Rock Art Debate in Scottish Parliament, 19 February 2020

Brophy, K 2018 ‘The finest set of cup and ring marks in existence’: the story of the Cochno Stone, West Dunbartonshire, Scottish Archaeological Journal 40, 1-23.