Hidden Heritage of a Landscape 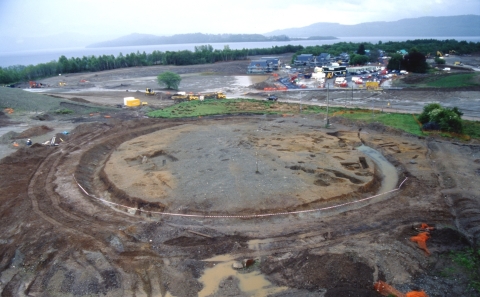 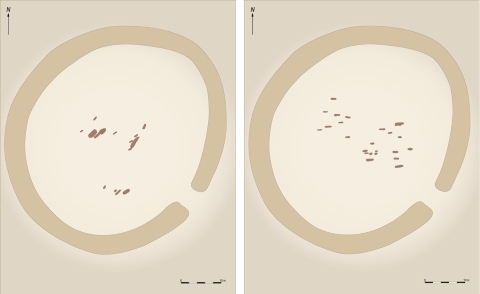 Between 2003 and 2005, a major excavation was undertaken at this lochside development prior to lodge and golf course development. The project was undertaken by GUARD for the client De Vere Hotels. Evidence ranging from the Mesolithic period to the Industrial revolution was identified.

Preliminary desk-based survey of the area had noted that in 1851, at the nearby cairn of Boiden, a bent Viking sword, shield boss and a spearhead were recorded (the finds are now lost). In the adjacent area in 2003-5, a massive ring ditch (Fig. 1) was excavated – an approximate internal diameter of 45m and with the ditch varying between 2 and 6m in width. A further Viking shield boss was recovered from the ditch, whose primary fill is dated by C14 to the 8-9th century AD.  Defined by this ring ditch are a series of six Viking graves with grave goods and a further nine graves of the same orientation but lacking goods (Fig. 2). They are confined to the south part of the enclosed area, adjacent to a timber structure which is orientated roughly E-W, potentially a chapel. There are indications that some of the Viking grave locations were marked by a post. 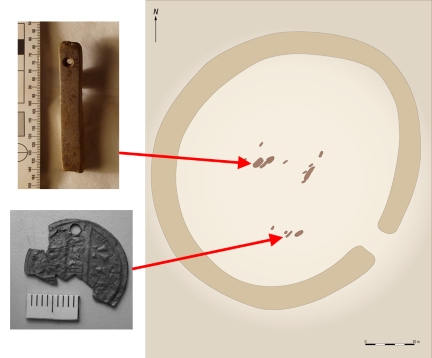 Grave goods include shale bangles and a finger ring, a Scandinavian whetstone (Fig. 3), a perforated broken Anglo-Saxon coin (Aethelred I of Wessex 865/6-871) and another indeterminate Anglo-Saxon penny much damaged, a bracelet of twisted copper alloy, iron knife blades, and a glass bead; all finds were spread across several graves and no grave of greater wealth was indicated.

A second group of graves which are consistently oriented SW-NE lack any grave goods, except in a number of cases a single iron rivet could indicate either a token gift or the remnants of two pieces of wood conjoined with a nail to form a cross or grave marker.

The ring ditch encloses a third cemetery with all its graves oriented E-W in the Christian tradition and considered to date from the 12-13th Century AD.

‘Hidden Heritage of a Landscape’ 2019, https://hiddenheritage.org.uk/project/up-coming-events/. This web page developed from a local heritage initiative from the nearby villages of Arrochar and Tarbet and which hosts edited elements of the final publication by period and by agreement with the main authors.

Hidden Heritage of a Landscape