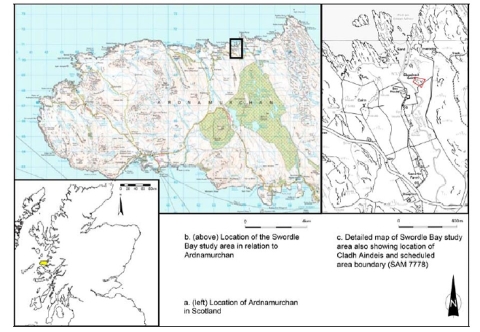 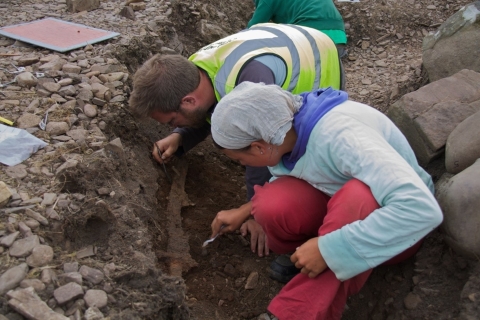 Excavations in 2011 as part of the Ardnamurchan Transitions Project (Fig. 1) revealed a single stone setting in the shape of a small boat which was in turn covering the remains of a wooden rowing boat used as the final resting place of a Viking. Located adjacent to a Neolithic cairn, Harris has suggested that some of the stones from that earlier memorial

may have been reused for the boat burial, and thus perhaps indicating appropriation of the location. The boat, of which some 213 rivets were recovered, was set within a low-lying coastal mound. Amongst the infilling stones, a shield boss and spear (Fig. 3) were identified, probably representing ritual placement as part of the grave closure, and both seem to have sustained deliberate pre-deposition damage. Within the boat itself were located the main grave goods,

adjacent to the area where it is assumed that the body had lain with its head to the west.  Poor conditions for preservation in the gravel deposits meant that only two teeth were recovered, but they were sufficient for isotopic analysis. The results indicate that the individual spent their childhood years by the sea, but clearly they did not come from the region of burial. Montgomery suggests Eastern Ireland, North East Mainland Scotland or Norway/Sweden as areas of origin.

The  rich burial assemblage, comparable to Kiloran Bay on Colonsay or perhaps the Scar boat burial on Sanday in Orkney, included many elements: a deliberately damaged sword (Figs. 2 & 4), an axe, a substantial iron ladle with hammer and tongs placed within it (Fig. 5) and additional traces of basketry, a drinking horn mount, ringed-pin of knobbed type, a sickle, whetstone and flint strike a lights. Most of the items were placed around the body position. Links to the Irish Sea region are indicated by the knobbed-pin, whilst most of the rest are Scandinavian in origin. The sword, bent and broken, can be dated to the late 9th or early 10th century typologically based on Scandinavian examples, although it is possible that in this context there may be a slight delay in deposition.