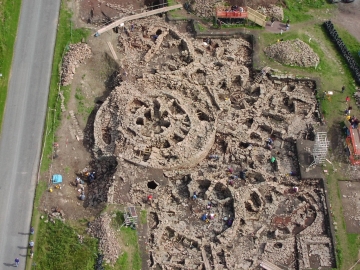 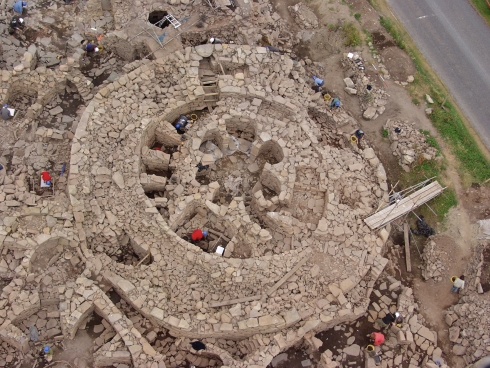 Dunrossness in the south mainland of Shetland

The Old Scatness Project explored a multi-period settlement sequence that has provided an important insight into the lives of the occupants of the site from the Early Iron Age to the 20th century.  The Middle Iron Age broch and sequence of buildings surrounding the broch (Figs. 1 & 2) provided an important architectural history spanning the Middle Iron Age, the Late Iron Age or Pictish period, and beyond. Scandinavian artefacts dominated the archaeological record from the tenth century, indicating a dramatic change in culture and lifestyle (Fig. 3). 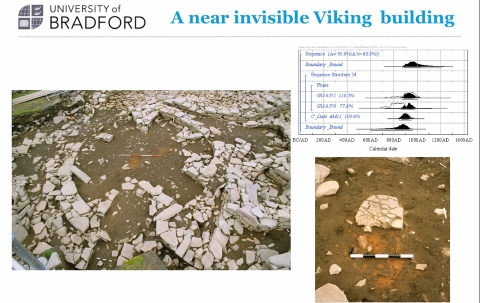 The accurate dating of the structural and depositional sequence allowed factors such as cultural change to be viewed within a more precise chronological framework.

An understanding of the economic exploitation both of the surrounding landscape – for arable agriculture, animal husbandry and other economic resources. The long chronological framework has allowed the study of themes such as continuity, changes in agricultural practice, and intensification in production.

The formation of archaeological deposits and sediments

The integrated investigation of deposits associated with ironworking, fuel exploitation, the identification of floor surfaces, and the formation and management of arable soils.

Evidence for craft specialisation, such as copper alloy casting and ironworking, and imported cultural material such as pottery and Roman glass, provide evidence for both production and trade and how this might have changed over time.

Power, status and social hierarchies in the Mid- and Late Iron Age

The artefact (Fig. 4) and economic evidence together with evidence derived from the use of space, and control of wealth and status social systems has contributed both to our understanding and to the reconstruction of past social systems. 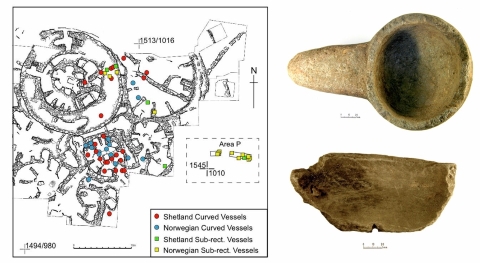 Bond, J M and S J Dockrill 2014 ‘The prehistoric village of Old Scatness: A research study in longevity, ecodynamics and interactions, in R Harrison and R A Maher (eds.) Human Ecodynamics in the North Atlantic: A collaborative model of humans and nature through space and time, 35-53. Lanham, Maryland: Lexington Books.

Dockrill, S J, C M Batt & Z Outram 2006 ‘Time and place: A new chronology for the origin of the broch based on the scientific dating programme at the Old Scatness Broch, Shetland,’ Proceedings of the Society of Antiquaries of Scotland 136: 89-110.

Guttmann, E B A, I A Simpson & S J Dockrill 2003 ‘Joined-up archaeology at Old Scatness, Shetland: Thin section analysis of the site and hinterland’. Environmental Archaeology 8(1): 17-31.