Lewis Chessmen at the British Museum 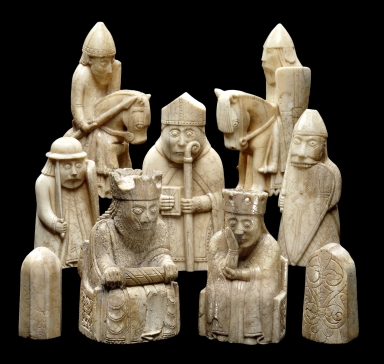 Between 2007 and 2018 Mark A Hall and David H Caldwell carried out a re-assessment of the Lewis hoard of gaming pieces, popularly known as the Lewis chessmen. We sought to move the debate onto new ground in several areas: 1. The island context was re-assessed in terms of the hoard being there deliberately rather than as a mere accident of the weather; this permitted a Kingdom of the Isles context to be established. This context also linked to debates about cultural identity and the Norse-Gael transition. 2. The gaming context was re-assessed to broaden out from chess to assess the other board-games represented: merels, tables and hnefatafl, and in particular the fluidity between chess and hnefatafl. The wider cultural significance of board-games was also assessed. 3. Working with Dr. Caroline Wilkinson (then Dundee, now Liverpool [John Moore’s] University), facial anthropology was carried out on the faces of the figurative pieces to establish sets of traits that indicated the work of at least 4 workshops. Trondheim was confirmed as the most likely place of manufacture. 4. The legacy effect of the chess pieces was considered in contemporary, modern popular culture.

The research delivered outputs in terms of exhibitions and displays across Scotland, international conferences, a range of publications and media coverage.

Caldwell, D H and Hall, M A 2018 ‘The Hoard of Gaming Pieces from Lewis, Scotland: Context and meaning’, in Stempin, A. (ed.) The Cultural Role of Chess in Medieval and Modern Times, 50th Anniversary Jubilee of the Sandomierz Chess Discovery, Poznań,  (= Bibliotheca Fontes Archaeologici Posnanienses 21), 97-108.

Hall, M A 2017 ‘Gaming, Material Culture and Hybridity: The Kingdom of the Isles at play’, in Cooijmans, C. (ed.) Traversing the Inner Seas Contacts and Continuity in and around Scotland, the Hebrides and the North of Ireland, Edinburgh: The Scottish Society for Northern Studies, 51-84.

Lewis Chessmen at the British Museum