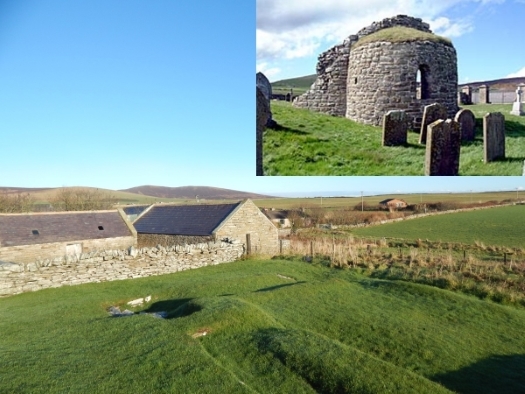 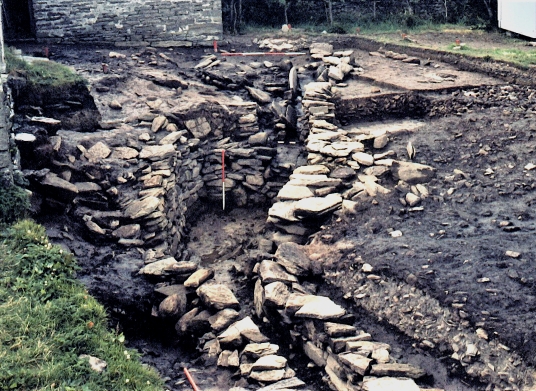 Excavations undertaken discontinuously between 1978 and 1993 revealed a Norse period horizontal mill adjacent to the site of the Earl’s Bu and Round Church (Figure 1). Cutting through a Bronze Age burnt mound at one side and located on top of Viking period activity on another, the dry- stone construction of an underhouse, leat and lade (Figure 2) accessed a water supply north of the modern farm by a process of ponding. It had a short life, potentially only a few decades. The Viking Age deposits are rich middens dated to the 9th and early 10th century AD and include significant animal and fish bone elements in addition to a substantial collection of steatite vessel fragments. The collapse and rapid infilling of the mill structure incorporates exceptionally rich midden dumps, some of the richest examined in Orkney to date. 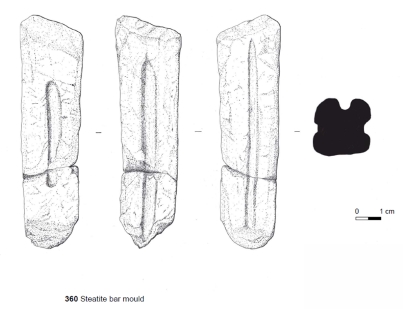 Feasting evidence supports the commentary provided in the Orkneyinga Saga, and it is clear that the Earls commanded significant resources both locally and more widely within Orkney in the Late Norse era. This was a centre of consumption in contrast the centres of production identified elsewhere – Birsay, Snusgar, and Quoygrew for example. Additional identification of bullion activity – ring money, scrap gold, ingot moulds (Figure 3) and crucibles with evidence for the working of both gold and silver -- plus two oblate sphere weights in the Baltic system, all provide a coherent indication of international contacts and integration within the wider economy at play in Late Norse Orkney. The overall site of the Earl’s Bu is considerably larger than traditionally viewed, incorporating industrial activity at Lavacroon, additional dwellings under the current Saga Centre and great complexity in the Guardianship area where grass covered foundations are visible. A Pictish symbol stone was incorporated into the later construction within the Guardianship site, but otherwise it would appear that this site is unusual in being a virgin Viking Age foundation, lacking immediate estate evidence of the Pictish/Iron Age periods.

Mainland, I and C E Batey 2019 (forthcoming) ‘The nature of the feast: Commensality and the politics of consumption in Viking Age and Early Medieval Northern Europe,’ World Archaeology, 51.1.