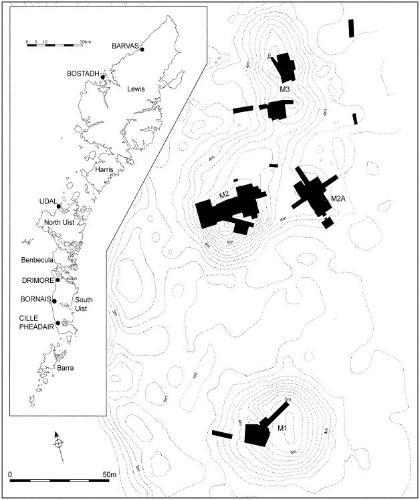 The settlement at Bornais in the Western Isles of Scotland is one of the largest rural settlements known from the Norse period in Britain. It spans the period from the fifth to the fifteenth century AD and includes at least five separate settlement mounds.

The site sequence begins with a badly damaged wheelhouse dating to the fifth century AD on mound 1, though there are clearly earlier deposits below this. The settlement then appears to move to mound 2 in the sixth to seventh century AD, though the evidence for this activity was only superficially explored. The Norse settlement commences in the late ninth century AD and was identified on all the mounds. 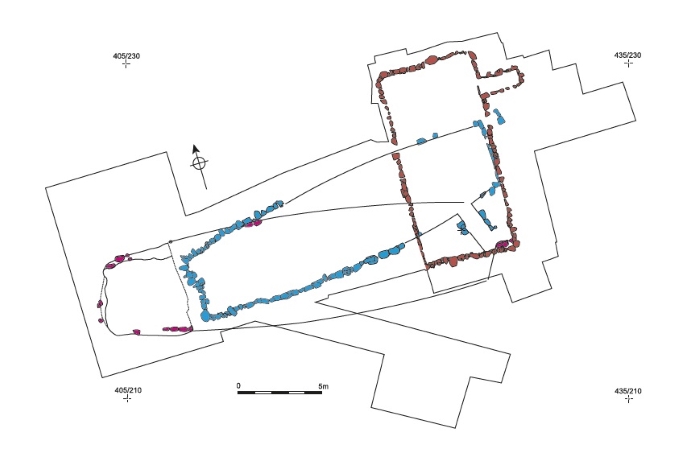 The excavation of mound 2 revealed a sequence of high status buildings that span the Norse occupation. House 2, constructed at the end of the eleventh century AD, was a well preserved bow-walled longhouse, and careful excavation and detailed recording of the floor layers has revealed a wealth of finds that provides invaluable insight into the activities taking place in this building. House 3 is very different in form and has a rectangular shape with straight sided walls. It might indicate the increasing Scottish influence on the region at the beginning of the thirteenth century.

The excavation of mound 2A provides an insight into the less prestigious areas of the settlement and contributes a significant amount of evidence on the settlement economy. The area was initially cultivated before it became a settlement, and throughout its life agricultural activities, such as grain drying and processing, were important. In the thirteenth century the mound was occupied by a craftsman who produced composite combs. 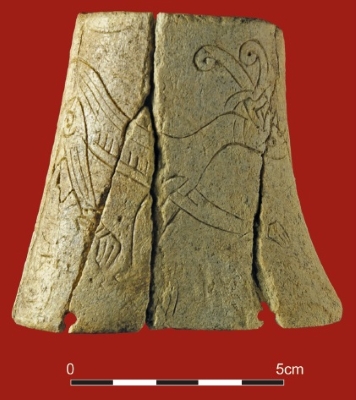 Excavations on mound 3 revealed a low status house dating to the fourteenth and fifteenth centuries AD. The evidence recovered makes a major contribution to the understanding of Norse Scotland.

Sharples, N.M. and Dennis, I. 2016 ‘Combs and comb production in the Western Isles during the Norse period’, in F. Hunter and A. Sheridan (eds) Ancient Lives: Objects, people and place in early Scotland. Essays for David V. Clarke on his 70th birthday, 331–58. Leiden: Sidestone Press.

Sharples, N. M. 2015 ‘A short history of archaeology in the Uists, Outer Hebrides’, Journal of the North Atlantic Special Volume 9, 1-15.

Sharples, N.M. 2004 ‘A find of Ringerike art from Bornais in the Outer Hebrides’, in J. Hines, A. Lane and M. Redknap (eds) Land, Sea and Home: Settlement in the Viking period. Society for Medieval Archaeology monogr. 20, 255–72. Leeds: Maney.