Scotland is part of the NE Atlantic passive margin, with geological features and landscapes that are evidence of a long and complex geological history. A prolonged period of extension, related to the rifting and breakup of Pangea, began in the Late Carboniferous and continued through the Mesozoic until breakup and the formation of oceanic crust occurred in the NE Atlantic in the Early Cenozoic. There is evidence that the Scottish landscape and surrounding basins experienced significant uplift in Early Paleogene. However, whether this uplift can be attributed to tectonic processes related to rifting or to the movement of the hot Iceland mantle plume past the west ofScotland and Northern Ireland at around 65 Ma, is still unresolved. It also remains unknown to what degree the Caledonian Highland mountains in northern Scotland, produced during the Caledonian Orogeny in the Late Devonian, have retained their original topography since they formed. 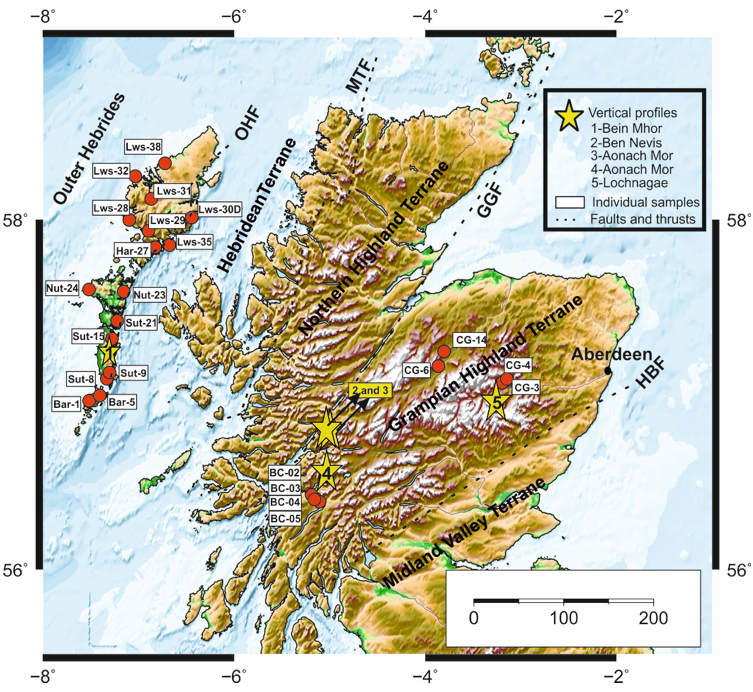 My PhD project employs AFT (apatite fission track) and AHe (apatite (U-Th)/He) thermochronology on samples collected from vertically profiles and transects from the Outer Hebrides in the west towards the central and eastern Grampian Highland (see figure). Using this data, and numerical thermal modelling approaches, I attempt to constrain the uplift and denudation history following the Caledonian Orogeny, which can give information about the magnitude and regional effect of tectonic and geodynamic mechanisms on the Scottish landscape.