Register for our free 3-week course 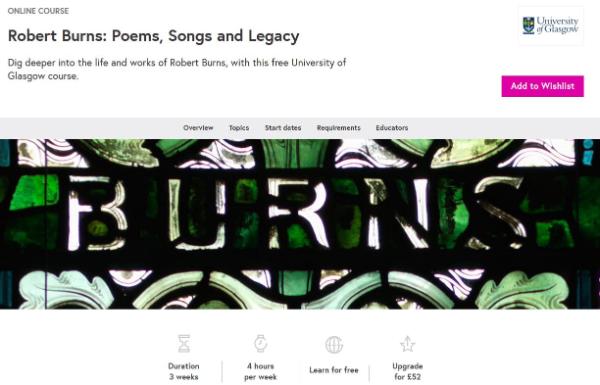 The Centre for Robert Burns Studies, in partnership with Futurelearn, runs the first Massively Open Online Course (MOOC) on Robert Burns. The course 'Robert Burns: Poems, Songs, and Legacy' is free and open to all. The course is aimed at newcomers as well as long-time fans of the poet, including those with an interest in Scottish history and culture, or just poetry, literature and song in general.

This course introduces learners to the life, works, and posthumous reputation of Burns. Over the course of three weeks, learners will explore three core questions: Who was Robert Burns? What made Robert Burns a poetic genius? What made Burns a worldwide icon? In the process, learners engage with diverse materials including poems, songs, music and video, as well as original publications and manuscripts by Burns and objects made to commemorate the poet.

Register for our free 3-week course