The Royal Society of Edinburgh

The Glasgow School of Art 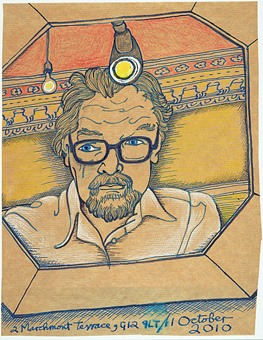 Professor Alan Riach, Scottish Literature, University of Glasgow was the Principal Investigator in a research project funded by a Royal Society of Edinburgh Arts and Humanities Worshop Award (£10,000) in collaboration with Dr Ken Neil of the Forum for Critical Inquiry at The Glasgow School of Art and Sorcha Dallas of The Alasdair Gray Foundation.

The Objectives of the project were:

1.  To commission three essays on Gray's work in terms of its literary, visual, and archival significance, with the materials and potential of the Alasdair Gray Foundation at the centre of each.

2.  To host three workshop events for stakeholders, specialist academics, postgraduate students, invited artists and writers, each contextualized by small exhibitions of previously unseen elements of the Alasdair Gray Foundation Archive and selections from the archives of the National Library of Scotland.

4.  To create a roadmap for delivering the consolidated archive as a public resource.

Three workshops were held as follows:

Workshop 1, University of Glasgow, 'The Literary' 28th September 2012 - with Will Self and Professor Cairns Craig

Workshop 2, The Glasgow School of Art, 'The Visual' 26th October 2012 - with Jenny Brownrigg and Simon Groom

Essays were commissioned as follows: Sally Harrower (archives at the National Library Service) for the Archive essay, Professor Alan Riach (Scottish Literature, University of Glasgow) for the Literary essay and Tom Morton (freelance writer and curator) for the Visual essay and the essays were all delivered by June 2012 in advance of the workshops.

The Royal Society of Edinburgh

The Glasgow School of Art