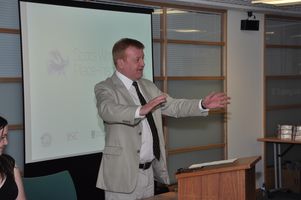 The SWAP school competition is now finished, the votes are in, and it is with great pleasure that we can now announce the winners.

We had entries from schools the length and breadth of Scotland. Three finalists were chosen from each age group by our judges, novelists Amal Chatterjee and Louise Welsh, and representatives from our project’s collaborators, Elaine Webster, outreach officer at Scottish Language Dictionaries, and Carole Hough, convenor of the Scottish Place-name Society. The winners were then decided by peer vote on the school intranet, GLOW.

The prize giving took place on Saturday 3 September at the University of Glasgow and was attended by all but one of the finalists, travelling from Oban on the west coast, Edinburgh on the east, Shetland in the north and the Scottish Borders in the south. The finalists and their guests were taken on a tour of the University, followed by an exhibition in the University Library’s special collections department which charted the progress of Scots in print from the 16th century to the present day. The ceremony itself was conducted by the Rector of the University, Rt. Hon. Charles Kennedy M.P., who announced the winners before saying a few words about the importance of Scots. Two of the judges, Elaine and Louise, spoke about how good the entries were and how much they enjoyed judging them. Newcastleton Primary School finished the ceremony by treating us all to a rendition of their winning song, The Boozie Woods, and we all retired to the cafeteria for refreshments. All the finalists received a certificate, a set of Say it in Scots books, a guide to Scottish place-names, an Amazon voucher, and a bag of mementoes of the University. You can see photographs of the event here.

Well done and thank you to everyone who took part in the competition. Keep writing!

And the winners are...

Prize for Best Use of Scots