Behavioural and evolutionary ecology of parasites and their insect vectors.

My interests lie in combining laboratory, field and theoretical investigations to identify the evolutionary and ecological factors that stabilize parasite life cycles; and applying this knowledge to highlight weak points in transmission that could be exploited by new and/or existing control strategies. I am particularly interested in these issues in the context of human malaria; a devastating protozoan disease (Plasmodium sp.) that kills millions of people in the developing world each year.

My research focuses primarily on the ecology and behaviour of the Anopheles mosquitoes that transmit Plasmodium between vertebrates during blood-feeding.  In both the laboratory, and in field settings in western Kenya (Mbita Pt) and southern Tanzania (Ifakara), I have investigated the determinants of Anopheles survival, reproduction, feeding behaviour, and parasite transmission ability. My current research programme extends a collaboration developed with the Ifakara Health Institute (IHI) where I worked as a postdoctoral scientist, and involves a combination of field work and ecological  experimentation in the Kilombero Valley of Tanzania, and laboratory-based infection studies.

My previous and ongoing research projects aim to identify environmental factors that enhance the transmission ability of mosquitoes; either by extending their longevity, contact rate with hosts, or the development success of incubating parasites. Historically, these issues have proved difficult to tackle because they have been studied either in artificial laboratory conditions that may not reliably reflect nature, or through large-scale epidemiological and entomological surveys in which correlation, but not always causation, can be established.

One way around these limitations is to create a large-scale Semi-Field System (Knols et al., 2002, Malaria Journal), in which the behaviour, ecology and population biology of mosquitoes can be experimentally studied in a contained facility that is exposed to natural climatic conditions and habitat features. In collaboration with the IHI and Wageningen University in the Netherlands, I oversaw the construction of a 700m2 Semi-Field System for study of Anopheles gambiae and Anopheles arabiensis during my postdoctoral work (2004-2006). Currently this is the largest facility in the world where the contained, experimental study of malaria vector ecology is possible.

Another key interest I have is the influence of malaria parasites on life-history traits of their mosquito vectors such as survival, reproduction and blood-feeding. I am particularly fascinated by the observation of mosquito responses to infection that may actually increase parasite transmission success; such as modifications in feeding and reproductive output that could extend vector longevity. I have also investigated the possibility that malaria parasites may enhance their transmission success by increasing the attractiveness of infected vertebrate hosts to blood-seeking mosquitoes.

A further interest lies in filling specific gaps in our knowledge about the basic ecology of Anopheles mosquitoes that hinder the implementation of existing and developing disease control strategies. Of particular note is our almost complete ignorance of the mating biology of male Anopheles. This deficit poses serious obstacles to the success of malaria and vector control programmes based on the release of mass-reared male mosquitoes into the wild.

These strategies include the release of genetically-modified (GM) mosquitoes that are resistant to malaria infection so that they can drive resistance genes into natural populations, and the mass-release of sterile male mosquitoes that will mate with wild females and prevent them from producing offspring. While at the IHI, my team and I conducted extensive study of the ecology and demography of male mosquitoes, including development of a protocol for estimating life history parameters from wild-caught Anopheles gambiae males, and evaluating the influence of larval conditions on adult male mating success. I continue to collaborate on this project with Wageningen University and the International Atomic Energy Agency. 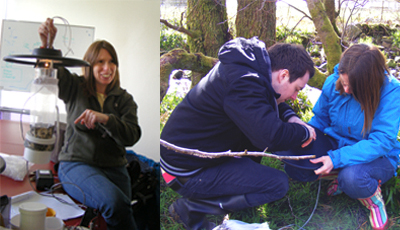 I have been collaborating with a colleague, Dr Barbara Helm, to conduct baseline studies of the ecology of biting arthropods that could have epidemiological and/or economic importance in Scotland through their role as disease vectors or as nuisance pests. Numerous potential vector species including ticks, mosquitoes, black flies and biting midges have now been recorded at our field research station (SCENE) near Loch Lomond.

So far, we have acquired and successfully tested a variety of traps for sampling these vectors, and are conducting preliminary analysis to investigate their interactions with host populations and environmental factors. Current efforts are targeted at identifying species, sexes, and life-history stages of midges, with support by APS Biocontrol. Background information indicates a high host prevalence of avian malaria in woodland breeding birds at SCENE. Future plans are being developed to screen vectors for a range of pathogen species including avian malaria.

More about this study system

Broader media talks/articles on this work