My research interests centre on fresh water ecosystems and particularly on behavioural ecology of fish. 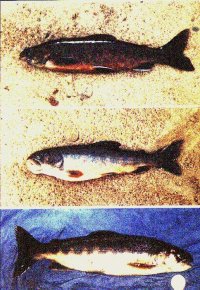 The Arctic charr Salvelinus alpinus is a fish species that is phenotypically highly variable throughout its range to the extent that its status as a single species must be in doubt. This variability takes the form of considerable variation in body shape, coloration, prey, feeding strategies and life-cycle between populations. However within some lakes, notably in Iceland, Scandinavia and Russia, there exists sub-populations living in sympatry with widely disparate body shapes and ecologies. In Loch Rannoch, Scotland benthic feeding and pelagic feeding forms have already been described. Recently our research team has discovered a third morphologically discrete morphotype. Laboratory studies have shown that the morphological characteristics seen in wild fish are inherited and genetic studies by Sheila Hartley at the University of Stirling has identified 2 discrete genotypic signatures within the three morphs. Current work seeks to investigate i) the consequences for life-history strategy of adopting different feeding strategies and ii) the evolutionary origin (sympatric or allopatric) of the morphotype complex in this lake.

Loch Lomond, Scotland, is the largest area of freshwater on mainland Britain. A series of introductions of non-native fish species to Loch Lomond since the early 1980's have had a significant impact on the aquatic communities living there. Work carried out by myself and colleagues at the University Field Station (SCENE) on the shores of Loch Lomond have documented and quantified many of these changes. The most significant of these have been a series of very rapid changes in the predator-prey relationships. These have taken the form of direct predation effects, where the introduced fish has been found to prey directly on a native species. A second form of predation effect that is known to have occurred in Loch Lomond is the indirect predation effect, where predators of fish shift diet onto the abundant newly introduced species. Thus this work has demonstrated a series of effects that are probably destabilising long-established relationships between predator and prey.

Individual salmonid fishes vary widely in their expression of aggression and in their tactics for acquiring food. In laboratory experiments the role of aggression in acquiring food in differing environments and the relative success between individuals in food acquisition using different acquisition tactics is being tested using Arctic charr and Atlantic salmon. In the freshwater "parr" stage of the life-cycle salmon in the wild are highly territorial, using aggression to obtain exclusive access to a feeding site. In aquaculture systems parr are housed at high densities where aggression hierarchies develop. Research in conjunction with Felicity Huntingford of Glasgow University and Jimmy Turnbull of Stirling University has shown that this aggression can result in significant physical damage which in turn may result in chronic pathological effects, elevated mortality and economic losses. Currently this research is focused on ways in which aggression may be ameliorated both behaviourally and through environmental manipulation.