This week, Elle Lindsay has put Dr Costa under the spotlight. Dr Costa is a Post-doctoral Research Assistant in IBAHCM, whose research currently investigates the effects of climate change in freshwater sticklebacks. Ana grew up in Brazil but spent the past five years prior to coming to Glasgow in Louisiana, United States, where she completed her PhD investigating the evolutionary relationship of bottlenose dolphin ecotypes in the Atlantic Ocean. Part of this work led to the recognition of the coastal bottlenose dolphin subspecies Tursiops truncatus gephyreus in the western South Atlantic. Currently a member of the Committee on Taxonomy of the Society for Marine Mammalogy, Dr Costa also has great interests in museum collections, travel, photography, outdoor activities and the sea. 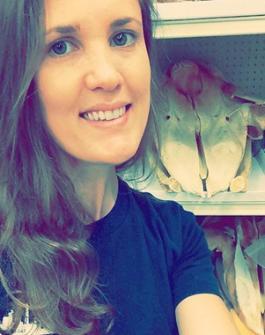 Can you tell us about your background?
I was born and raised in southern Brazil: I grew up mainly on an island called Florianopolis, which is the capital of the Brazilian state Santa Catarina. I spent my life outdoors, hanging around and exploring the several beaches around the island. The sea, animals, and worldwide travel fascinated me. At an early age I started to record my own observations of southern lapwing (a South American bird), beetles, and bottlenose dolphins, and was also an avid reader of National Geographic magazines. I think I knew I wanted to be a biologist from the age of ten. Initially, I wanted to work with big African mammals, but as soon as I began my Biology undergrad at the Federal University of Santa Catarina, I started working with marine mammals. I spent my university years spread between classes, marine mammal strandings and morphological collections. My first research project during my undergrad years was on skeletal morphology of bottlenose dolphins (under the supervision of Dr. Paulo Simões-Lopes), which led to a fascination of evolution. I then had the opportunity to work with humpback whales throughout my last semester.
During the year that followed my graduation, I worked as a marine mammal observer in seismic vessels in the central coast of Brazil. Alongside my interests in morphology, I decided to learn about genetics and utilise both tools to answer my research questions. Therefore, I earned a master’s degree in Biology at another Brazilian university, where I worked on the population genetics of bottlenose dolphins: this work helped me formulate my hypothesis about the presence of coastal and offshore bottlenose dolphin ecotypes on the Brazilian coast. I pursued a PhD. in Environmental and Evolutionary Biology at the University of Louisiana at Lafayette (United States) with Dr. Patricia Rosel. The result of this research led to the recognition of two subspecies of bottlenose dolphins on the South American coast and is also helping to elucidate the evolutionary relationship of the coastal and offshore bottlenose dolphin ecotypes of the eastern coast of the US.

What is the focus of your research?
For my post-doctoral research here at IBACHM, I am still working within evolutionary biology, but I switched gears a little bit and am now working with fish (threespine stickleback). I am currently focussing on the adaptation of Icelandic threespine stickleback populations to increasing water temperatures. Through the use of genomic, epigenomic, and morphological tools, the project is examining the genomic changes in thermally contrasting stickleback populations and how these changes are related to phenotypic traits. This research is part of a bigger project funded with NERC Highlights Topics Grant, which was awarded to Dr Kevin Parsons, Prof. Neil Metcalfe, Dr Jan Lindstrom and Dr Shaun Killen.

Why did you decide to come to IBACHM/UofG?
The research question of the project caught my attention. I am interested in investigating how environmental conditions (e.g. water temperature) and behaviour (e.g. ecological specialisation) drive the distribution and genetic structure of vertebrate species, leading to adaptive variation in the skull anatomy, evolution of different phenotypes, and even speciation. Though I had spent all my years as a researcher working with marine mammals, I thought that this post-doctoral research presented a great opportunity to learn new skills and work with a completely new animal group. I also realised that working with sticklebacks as models for the questions I am interested in answering would allow me to apply the acquired knowledge from my current research to other vertebrate species (such as small cetaceans).

What do you find most interesting about your work?
My new work has pushed me out of my comfort zone and presented new and exciting challenges. I have been learning a lot these past months and I believe that my experience here will help me in the future when I lead my own lab.

What has been the most positive aspect so far?
The entire experience has been positive. I think that to pursue a research career, we need to be constantly learning new skills, meeting new people for possible future collaborations, and facing new challenges to help us answer research questions. This work has been providing all of that.

What has been the most challenging aspect so far?
This research involves working with several different next-generation sequencing techniques, most of which are completely new to me. Thus, it has been a challenge learning about how to better analyse the data. It also involves working with a completely new animal group, so it has been a nice change to learn about these fish. Nonetheless, I think the most challenging aspect when I first moved here was definitely the Scottish weather; I wasn’t expecting such a difference in winter daylight duration between Scotland and the other places I have lived, so it took me few months to get used to it! I am definitely enjoying the spring weather though, and Scotland’s beautiful landscapes.

Are you where you thought you would be a year ago?
About a year ago I was applying for this position, which was offered to me in early June (2018). I only commenced my work here in January 2019 because I still had one semester remaining in my PhD. When I first applied, I wasn’t really sure if I was qualified since I had never worked with fish or epigenetics. Before I saw the call for this position, I had never thought about moving to Scotland or working with fish. It’s crazy to think that a post in a mailing list caught my attention and brought me somewhere completely unexpected.

If you could tell your PhD-self one thing, what would it be?
I had a great PhD experience. Although I worked hard for all of those years, I was also able to enjoy the entire experience (living in a foreign country, learning a new culture, meeting new people, visiting new places). There were definitely times of struggle, but I guess my best advice to my PhD-self would be: “Take it one step at a time. Keep doing what you are doing and love to do. In the end, everything will work out just fine.”

Can you tell us about your plans for the future?
My plans are to continue to work in the evolutionary biology, to try and apply what I am currently learning to other vertebrate species (especially mammals), and to get a permanent position as a professor at a university or a researcher in a research institution/museum.

Don’t miss Ana’s talk entitled ‘Bottlenose dolphins of the western Atlantic: evidence for speciation?’ on Friday 31st May at 16:00!