‌CONGRATULATIONS to Profs Maureen Bain and Sally Solomon (who sadly passed away in February 2015) on receiving the Howie and Dennis Surgenor Cup for outstanding contribution to the Scottish poultry industry. 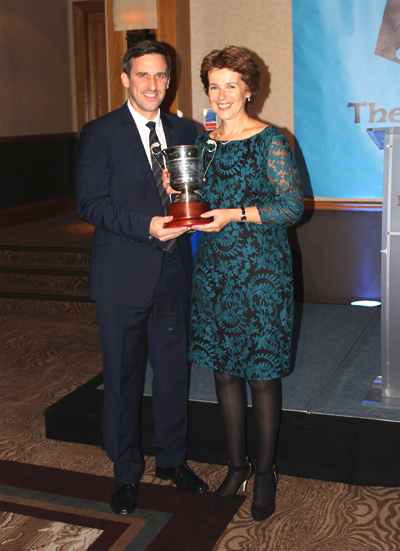 The cup was presented at the recent Scottish Poultry Club annual dinner which was attended by over 300 members of the British poultry industry.

Prof Bain’s lab, based at the Institute’s Garscube campus, is recognised as one of the leading research facilities worldwide in the area of egg and eggshell quality. It is in this area that research, established initially under Professor Sally Solomon and more recently under Prof Maureen Bain has had significant and meaningful impact on knowledge about eggshell formation, and on the means by which the poultry industry can maximise quality and minimise losses.

Prof Bain’s most recent collaborative work with the poultry industry and collaborators in Edinburgh has led to the development of effective measures of egg shell quality that have reduced losses due to egg cracking; and ongoing industrial collaboration is focussing on means to measure and select for better coverage of eggshells by the cuticle - a proteinaceous layer on the outer surface of the egg that forms the first line of defence to the penetration of bacteria from both chickens and the environment.

Below is a transcript of the presentation speech made by Chris Baxter, Sales Director at Harbro:

"It is my honour this year, on behalf of the Poultry Club of Scotland, to present the Howie Surgenor Cup. Last year’s worthy winner was John Retson who passionately believes in and works for the Scottish and UK poultry industry, and it was great to see his tireless efforts rewarded last year.

This year’s winner has also made an outstanding contribution to Scotland’s Poultry industry and to the wider world. She graduated with an Honours Degree in Zoology from the University of Glasgow and was duly appointed Junior Lecturer in the Department of Veterinary Histology.  Over the years she progressed from Lecturer, to Senior Lecturer, and to Professor and Head of Unit.  She was awarded the Gordon Medal in recognition of her services to Poultry Science. She has provided specialist knowledge and advice to the Scottish Industry on Egg formation and shell quality, her knowledge and advice helped the poultry industry around the world to change for the better and to deal with the challenges that have faced us over the years.

Before I announce the name of the worthy winner I need to say for the first time ever we have joint winners of the Howie Surgenor Cup, you could say we have a double yolker this year!! The first of the winners is Professor Sally Solomon who unfortunately can’t join us here tonight as I believe she is recovering in France from a small operation; our best wishes go to Sally.

Our other winner also graduated with an Honours Degree in Zoology from the University of Glasgow and with funding from the British Egg Marketing Board Trust, she began her Ph.D. under the supervision of Professor Sally Solomon, undaunted this other talented person threw herself into the discipline of Mechanical Engineering in an attempt to explain the mechanism of eggshell failure.  Working in collaboration with the Roslin Institute this person has developed molecular tools to improve selection for egg quality traits which are otherwise too expensive or difficult to measure. These tools offer, breeding companies, new exciting opportunities to select hens that lay stronger eggs. She has gone on to produce many publications on this subject and her work has helped our global industry understand and develop new commercial practices in breeding, nutrition, health and management of poultry.

Following graduation our second winner took up the position as Junior Lecturer at the Glasgow Veterinary School.  A permanent post followed and since that time this person has also progressed from Lecturer, to Senior Lecturer to Professor.  As an author, editor and speaker our joint winner has received global recognition for her work in the poultry industry. She is also a board member of British Poultry Science.

Our other joint winner, Ladies and gentlemen, is Professor Maureen Bain who I’m glad to say is with us tonight.

In their attempt to encourage the industry to become involved in the factors influencing eggshell quality, Professor Solomon and Professor Bain began a series of in house workshops.  Their effectiveness resulted in them both being recognised with the first ever Education Award from The World Poultry Science Association.

In the past few years they have reached audiences throughout Europe as well as Malaysia, Thailand, Russia, Morocco, Turkey and the U.S.A.

Prof Sally Solomon and Prof Maureen Bain have had a phenomenal impact on the Scottish , UK and World Poultry industries and a bit like the proclaimers they are a treasured Scottish duo that have gone global.

The Poultry Club of Scotland is immensely honoured to give the Howie-Surgenor Cup for outstanding contribution to the Scottish Poultry Industry and beyond, to Professor Sally Solomon and Professor Maureen Bain.

I would ask our joint winner Professor Maureen Bain to join me on the stage to receive the award.