Hacking for health at the SPHSU

The SPHSU ran a “Hacking for Health” hackathon over the weekend of 5th-7th October. 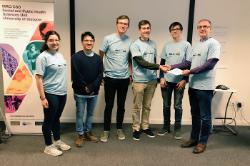 Sixteen enthusiastic computer scientist, graphic designers, artistic and researchers took part in the event to develop a prototype of a mobile app, computer game or interactive website to help us communicate the complexity of health to the public and policy makers. Participants formed three teams and each team had the chance to brain storm initial ideas with both Unit and external mentors.

After two days of hard work, the team presented their fascinating work to our jury. Although it wasn’t an easy decision, given the high quality of the work by all teams, the Health City computer game was announced as the winning prototype.

A video was produced to introduce the Hackathon theme, It’s not that simple.