We were among the first laboratories to determine that GPCRs undergo rapid phosphorylation following agonist addition. Primarily using the five members of the muscarinic receptor family as an exemplar GPCR class we have successfully applied phospho-proteomics, phospho-specific antibodies, receptor mutagenesis and cell signalling to define the signalling role of receptor phosphorylation. In these studies we described the phosphorylation bar-code that contributes to the signalling out-put of many GPCRs. 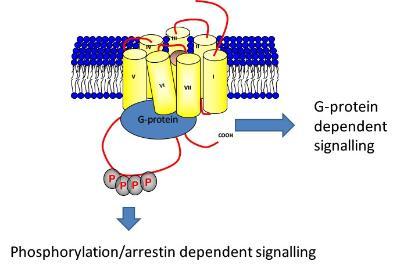 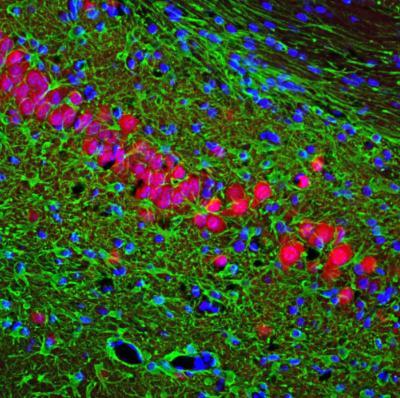 Neurodegeneration: To establish the validity of the M1-receptor as a target in neurodegeneration we have analysed mouse prion disease for features that map onto those observed in human Alzheimer’s disease (AD). In these studies we have established that mouse prion disease is a progressive terminal disease that is associated with progressive neuronal loss, particularly of cholinergic neurones of the hippocampus, which results in memory loss that can be reversed with clinical acetylcholine esterase inhibitors - as is the case in AD. Furthermore, late stage prion disease hippocampus expresses normal levels of muscarinic receptors that retain normal signalling and sensitivity to muscarinic drugs. Using this model we have been able to show the following:

• That muscarinic allosteric and orthosteric ligands can completely rescue the memory deficit in prion diseased mice
• That prolonged administration of M1-receptor allosteric modulators can slow the progression of terminal prion disease.

We are currently employing genetic and chemical genetic approaches as well as novel pharmacological ligands, advanced imaging and protein and RNA ‘omic approaches to study the molecular mechanisms of the action of muscarinic ligands in memory loss in neurodegeneration and to determine the mechanism of muscarinic-mediated prion disease modification. 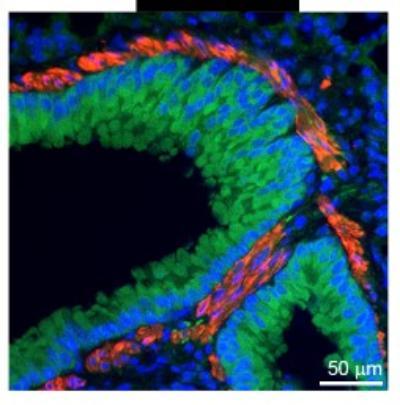 Free fatty acid receptor (FFA) family: In collaboration with Professor Graeme Milligan we have BBSRC funded programmes to investigate the physiological and patho-physiological role of the FFA family of GPCRs. This receptor family consists of 4 members FFA1-FFA4. In this family FFA1 and FFA4 respond to long chain fatty acids such as the essential omega-3 fatty acids found in fish oils, and the FFA2 and FFA3 receptors respond to short chain fatty acids such as acetate, butyrate and proprionate that are generated by the gut microbiota. Using novel pharmacological ligands in concert with genetic animal models we have defined new roles for this receptor family. In particular, we have established that the FFA4 receptor expressed in airway epithelium mediates airway smooth muscle relaxation. We are currently engaged in a programme investigating the validity of FFA4 as a novel target in human inflammatory airway diseases such as asthma and chronic obstructive pulmonary disease (COPD).

Neglected and hard to target GPCRs: In a programme of research closely associated with the recently established bin at Glasgow we are collaborating with industrial partners and academic laboratories to establish the signalling properties, in vivo function and therapeutic potential of hard to target GPCRs. These include receptors such as GPR35 and GPR84.

Applying much of the pharmacological, cell biological, genetic and proteomic approaches developed in the study of mammalian cell signalling the we are investigating essential phospho-signalling cascades in malaria as well as contributing to a world-wide network to define mechanisms of drug resistance in malaria.

Targeting the PfCLK-family: In collaboration with GSK we have an active programme to determine the fundamental biology and therapeutic potential of targeting the four members of the PfCLK family. Considered to be important in RNA processing we have screened GSK (TCAMS) molecules that are known to have anti-malarial activity as inhibitors of the PfCLK family. These studies have defined unique inhibitors that kill the parasite at various life stages through inhibition of PfCLK3. In this way we have not only validated PfCLK3 as a novel target in malaria but also determined novel chemical inhibitors that could act as start points for drug development.

Chemical genetic approaches: We have been developing chemical genetic approaches to probing the function and potential therapeutic value of targeting protein kinases in malaria. This has involved screening for inhibitors to particular protein kinases and then establishing mutations that render the kinase insensitive to the inhibitor. Generating a genetically modified parasite strain that expresses the mutant kinase in place of the wild type kinase provides a method of not only determining if inhibitors kill the parasite by targeting the protein kinase but also will establish the on and off target activity of the inhibitors allowing us to use the inhibitors as probes for kinase function.

Malaria resistance: We have joined a worldwide consortium of scientists investigating the mechanisms of artemisinin resistance associated with mutations in the K13-kelch protein. We have been employing mass spectrometry based global proteomics to establish the changes in the proteome associated with parasite resistance.

We collaborate widely with the academic and industrial community. The list below are collaborators with whom we have obtained funding. In addition, we have many interactions that are not underpinned by specific funding schemes but nevertheless have resulted in highly productive long term research.