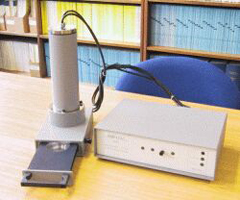 The SURRC pulsed photo stimulated luminescence system was designed and developed at the Scottish Universities Research and Reactor Centre, and provides an opportunity for effective detection of irradiated foods using a rapid instrumental method. Originally developed for rapid screening of irradiated herbs, spices and seasonings, it has been validated for a wider range of foodstuffs and is finding other scientific applications in assessment of fire damaged structures, and environmental dosimetry. The system is commercially available from SUERC. It has been supplied to more than 80 UK, European and US laboratories, for routine commercial quality testing, and in support of labelling requirements

The system can be used in a stand-alone mode, with simple push button controls, or in conjunction with a laboratory computer for data storage and record keeping. It is readily transported and easy to use.

Simple screening measurements are possible (PSL Screening), or the system can be used in conjunction with a calibrated radiation source (calPSL). Samples are put into disposable petri dishes. Closing the sample drawer prepares the instrument for measurement, usually taking 15-60 seconds.

During the measurements the sample is stimulated with a pulsed Infra-Red (IR) source, and UV-VIS Anti-Stokes Luminescence is measured with exceptional sensitivity using a patented digital lock-in photon counting method. Irradiated samples produce a specific signal which is detected and quantified.

For screening, the signal level is compared with two thresholds defined from reference data. The majority of irradiated samples produce a strong signal above the high threshold level. Signals below the lower threshold indicate that the samples have not been irradiated. Intermediate signal levels between the two thresholds suggest that further tests or investigations should be made. The two threshold concept provides an extremely effective screening approach, achieving detection rates above 95% in first-pass laboratory tests. Samples can be retained for reference purposes, or can be sent to a calibrated laboratory for confirmation. PSL screening can also be backed by the internationally validated thermoluminescence test.

The system will be of interest to any organisation concerned with the detection of whether food or food ingredients have been treated with ionising radiation.

The PSL system has recently been subjected to international blind trials. The results confirmed published performance obtained in earlier research 1-7. As a result of these trials 8-10, the PSL method has been accepted as a validated method in the UK and as an EU standard.

Terms and Conditions of supply of Pulsed PSL Screening System