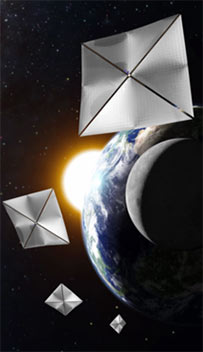 Solar sailing is the use of the pressure generated by the light of the sun to drive a spacecraft. A solar sail is a large, lightweight, highly reflective membrane that is deployed from the spacecraft itself after launch and by reflecting the photons of the Sun, it generates a net thrust on the spacecraft. Solar sailing is an old concept, but its potential has been recently proven by successful in-orbit solar sail demonstrators.

We are interested in studying the orbital dynamics and the control of solar sails. Unlike conventional low-thrust propulsion, solar sails generate a force that is mainly pointing away from the Sun, and furthermore its magnitude depends on size of the sail, as well as its orientation. This property can be exploited to obtain new stationary points in space as well as different orbits. We are also interested in new architectures of solar sails, different from the conventional flat-square or spinning sails. These novel architectures can also be deployed from nanosatellites, such as CubeSats, and therefore enable near-term and low-cost solar sailing.

One of the major constraints of a space mission is the lifetime, which is often dictated by the limited propellant on-board. Additionally, explosive propellants are not even allowed on platforms like CubeSats due to safety issues. Solar sailing, instead, is a propellant-less propulsion technology, which relies only on the sunlight: therefore, it enables in principle extremely long space missions, as well as propelling CubeSats without the use of thrusters.