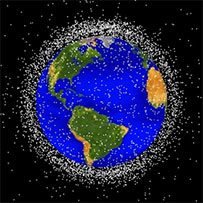 One of the biggest threats to near-Earth environment is the build-up of old spacecraft that are left in orbit at the end of their missions, and debris generated by spacecraft collisions. One particular type of debris is constituted by very thin foils of thermal material, used to insulate the spacecraft, which delaminates due to aging.

Predicting the orbital evolution of this type of debris is challenging, because of their physical properties: their area-to-mass ratio is extremely high, and furthermore their surface is reflective, hence solar radiation pressure continuously perturbs their orbit. In addition, they are extremely flexible, and therefore their shape and effective area change over time. Our research aims at improving the precision of the prediction of the orbit, by taking into account all these effects.

While the current trend is to guarantee that a spacecraft shall re-enter the atmosphere after a maximum of 25 years, currently existing debris fragments, can stay in orbit for decades, and have to be tracked to mitigate their effect: even if tiny, these debris can potentially destroy operative spacecraft in case of collision, due to their extremely high velocities.

The near-Earth environment is threatened by the build-up of space debris. This comes from spacecraft left in orbit at the end of their missions and the debris generated by spacecraft collisions. This debris includes very thin foils of thermal material, used to insulate the spacecraft, which delaminates due to aging.