Current examples include LISA, a spaceborne gravitational waves mission which involves inter-spacecraft ranging over millions of kilometres, its precursor technology demonstrator mission, LISA Pathfinder, which required distance monitoring over tens of centimetres within a single spacecraft, and GRACE II, a proposed follow-on to the GRACE gravity and climate explorer mission, which features inter-spacecraft distance monitoring over hundreds of kilometres.

Only laser interferometry offers the required precision of measurement over such baselines. 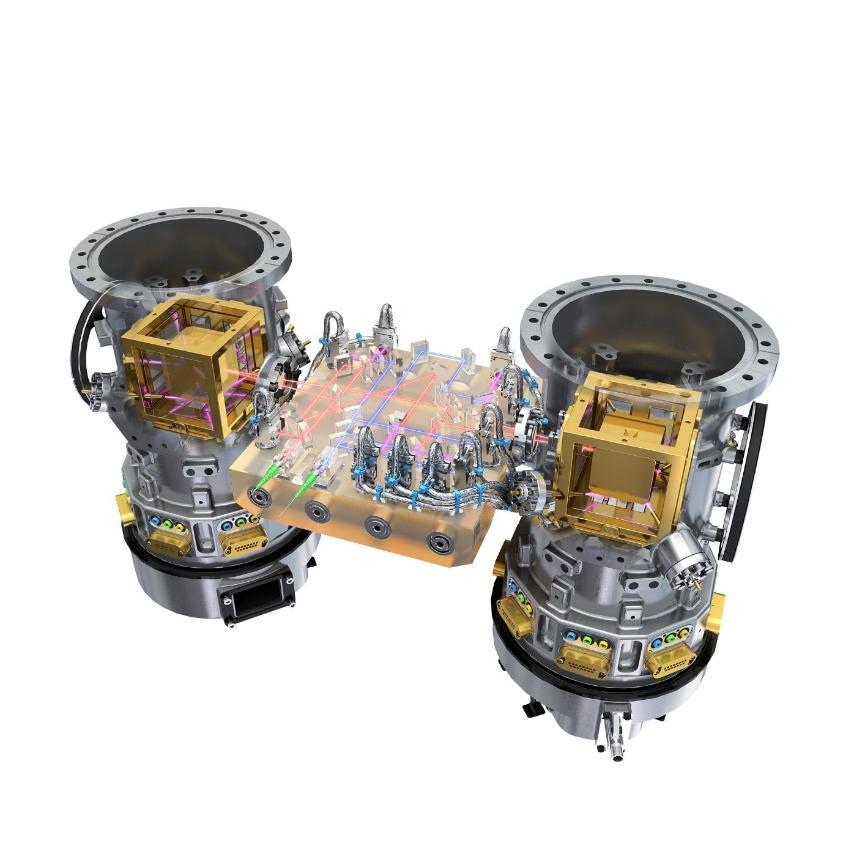 We are established members of the LISA consortium and along with our UK partners, the UK Astronomy Technology Centre in Edinburgh, we will play a lead role in the development and delivery of the optical bench assemblies for the future ESA-led LISA mission. Previously our work was focused on LISA Pathfinder for which we developed and delivered the measurement “heart” of the spacecraft – a 20cm square block of low expansion material to which are attached multiple silica mirrors and beamsplitters.

For the mounting of optical components in our optical systems we enhanced the technique of hydroxide catalysis bonding to incorporate precision placement and alignment of the components. Hydroxide catalysis bonding is an ideal method of optical component attachment for spaceflight applications: it forms an ultra–strong and dimensionally stable bond but in the initial stage allows a period of adjustment of component alignment prior to the bond forming.

As part of our work we developed component manipulation and beam measurement techniques that allow absolute location of interferometer beams at the 10 micron level and pointing with better than a few tens of microradian accuracy.

In preparation for the large-scale constructional task for LISA, we have recently added significant automation to the precision hydroxide catalysis bonding technique and have demonstrated that achievement of the highest accuracy of component alignment and bonding is possible in under 30 minutes. This is more than an order of magnitude improvement in process speed compared to the more manual approach used for building the LISA Pathfinder optical system.

We also develop specialised optical fibre systems for our space applications and have demonstrated excellent alignment stability over the demanding temperature, radiation and vibration conditions involved in spaceflight.

The advent of a spaceborne gravitational wave detector will reveal directly for the first time the most extreme astrophysical events such as supermassive black hole collisions, enhancing greatly our understanding of the Universe.

Furthermore, we have already seen industrial interest beyond the space sector – e.g. in areas such as high power lasers. Such lasers are of great interest for manufacturing, in defence and for communications.