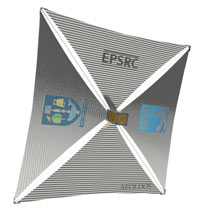 Old spacecraft continue to travel at many miles per second, posing a collision risk to active and manned vehicles.

Fortunately, in low Earth orbit the upper atmosphere is still thick enough to exert a drag force which eventually causes them to re-enter and burn up. Providing the spacecraft with a deployable aerobrake to be deployed at the end of their missions could reduce the duration of this dangerous period.

The aerobrake must be extended from a folded configuration and supported in place by a deployed rigid structure because, although there is a very thin atmosphere in low Earth orbit, it cannot support an inflated membrane in the manner of a more familiar parachute system.

As the spacecraft starts to burn up, the sprung elements must collapse and allow the aerobrake to fold again. This is essential because the aerobrake would otherwise serve to slow the re-entry process and reduce the thermal loading on the spacecraft. This could result in dangerous debris surviving the fall and reaching the ground.

Space debris in low Earth orbit has the potential to completely close down access to space, because every collision with a debris object produces yet more fragments.

If current trends continue, near-Earth space will become too dangerous to cross, so devices such as this aerobrake are needed to remove old spacecraft before they have a chance to fragment due to collisions with existing debris.