A new piece of technology which will help in the search for gravitational waves is setting off for South America on its final earthbound journey before heading to space.

The LISA Pathfinder spacecraft is the first part of an ambitious European Space Agency (ESA) research project which will study the ripples in spacetime caused by massive astronomical events. The existence of these ripples, known as gravitational waves, was predicted by Einstein’s Theory of General Relativity but they have not yet been detected on Earth by any sensors built to date. 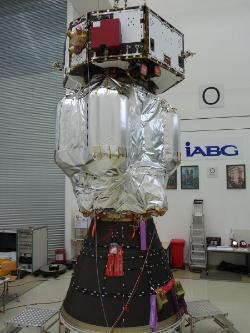 The ESA partners believe that the best way to detect the extremely faint ripples is to place multiple highly sensitive detectors in the vacuum of space, where they will be free of the Earth’s vibrational interference.

LISA Pathfinder will test new detector technologies which will be used in eLISA, the planned full-scale gravitational wave detector.

The LISA Pathfinder spacecraft has passed all its final tests and will start its final earthbound journey when it is shipped to the spaceport in Kourou, French Guiana, on Thursday (3 September).

In November, the spacecraft will set off from Earth atop a Vega rocket, an expendable launch system developed by the Italian Space Agency and the European Space Agency. It will be heading towards the Lagrange Point L1, a point in space between the Earth and the Sun where interference from each is minimised.

A team from the University of Glasgow’s School of Physics and Astronomy played a key role in developing and building the LISA Pathfinder.

Dr Harry Ward, who leads the University’s LISA Pathfinder team, said: "The wait is nearly over. After an immense amount of hard work, the first major step towards spaceborne gravitational wave astronomy is about to take place.

“It’s a tremendously exciting achievement and we’re pleased and proud to have been involved from the start.”

The payload of LISA Pathfinder contains two floating gold/platinum cubes that, ideally, will move completely free of any disturbances. A laser system monitors the separation between them with exquisite precision looking for tell-tale movements caused by any tiny stray forces.

A team in the Institute for Gravitational Research at the University of Glasgow developed and built this novel metrology system - called a laser interferometer. Its performance is quite outstanding: it can detect distance changes as small as 10 picometres, or one hundred millionth of a millimetre.

The University of Glasgow is also well-connected to the project by other routes: two PhD graduates from the School of Physics and Astronomy are playing leading roles. At ESTEC in the Netherlands, Dr Paul McNamara is the mission Project Scientist, and at the Albert Einstein Institute in Hannover, Dr Martin Hewitson leads the data analysis effort for LISA Pathfinder.

With launch now firmly in sight, scientists from all over Europe are completing their final preparations for mission operations. Once the spacecraft reaches its final destination the precision technologies will be extensively tested to ensure they work exactly as expected.

Two identical cube-shaped test masses weighing about two kilograms each will be free-floating in their own vacuum canisters for the duration of the mission. They will be almost free of all internal and external disturbances and will thus allow the demonstration of the precise measurement of free-falling masses in space. A special gold-platinum alloy has been used for the masses to eliminate any influence from magnetic forces. Using ultraviolet radiation, a contact-free discharge system prevents electrostatic charge build-up on the test masses. The caging and grabbing mechanism – responsible for protecting the test masses from intense vibrations during launch, releasing them in a highly controlled setting, and capturing them as necessary – is a particular challenge in this context. A laser interferometer will measure the position and orientation of the two test masses relative to the spacecraft and to each other with a precision of approximately 10 picometers (one hundred millionth of a millimetre).

In addition, there are less precise capacitive inertial sensors that also help determine their positions. The positional data is used by a Drag-Free Attitude Control System (DFACS) to control the spacecraft and ensure it always remains centered on one test mass. The actual position of the satellite is controlled through cold gas micronewton thrusters, which have the capability of delivering propulsion in extremely fine and uniform amounts. The thrust generated is in the micronewton range – this equates to the weight of a grain of sand on Earth.

Paving the way for new astronomy

LISA Pathfinder paves the way for eLISA, a large space observatory for the direct observation of one of the most elusive astronomical phenomena – gravitational waves. These tiny distortions of space-time were predicted by Albert Einstein and their observation requires an extremely sensitive and highly precise measurement technology. Space observatories like eLISA will measure gravitational waves in the millihertz range. They will complement ground-based detectors such as GEO600, aLIGO, and Virgo, which observe at higher frequencies in the audio range. Gravitational wave observatories will probe unknown domains – the “dark side of the universe” – in concert with other astronomical methods. One example is the formation, growth and merger of massive black holes. It will also be possible to further test Einstein’s Theory of General Relativity and search for unknown physics.