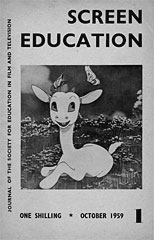 Screen Education, the journal that was to become Screen, was launched in October 1959. Between that date and October 1968, forty-six issues of Screen Education appeared. The journal's first issue under its new title appeared in January 1969 as volume 10, number 1.

During 2009, Screen hosted special events and celebrations to mark the journal's 50th birthday, including a the Anniversary Screen Studies Conference in July, a bumper issue of the journal (volume 50, number 1), and Screen-sponsored postgraduate research events. Details and reports of all the anniversary events are archived below.