The Senses and Crossmodal Perception - Aristotelian and Contemporary Perspective

Questions of how to individuate the senses and what forms of crossmodal perception exist are topics of considerable interest in contemporary philosophy of perception, and recent work proceeds often informed by the latest scientific work on the nature of perception. However, they were questions also addressed by Aristotle. This conference brings together contemporary philosophers of perception and scholars of Aristotle to examine these questions, learn from each other’s scholarship, and make progress in answering them.

Contemporary philosophers argue about whether these properties can be perceived or not. One question here is whether Aristotle regards perception of these properties as amodal or as crossmodal. Does consideration of either of these ways of perceiving these properties inform the case for thinking that they are properties that can be perceived? In fact, Aristotle’s strict division of the five senses is an artefact of his method; he recognises that actual perception is rarely if ever purely of one mode. It is an open question whether his division of the senses relies on stimulus, representational content, phenomenal character or the physical system involved, or on some other way of distinguishing them. Likewise it is a disputed question in contemporary philosophy, how we should individuate the senses.

The interaction of the senses affects the way in which Aristotle’s theory can cope with the deliverances of phantasia and (some kinds of) memory, which derive from actual perception. How perceptual imagination and memory are similar to, yet different from, perception is a question that has echoed down the ages to be also considered by contemporary theorists

Aristotle’s philosophy of perception has been subject to intense 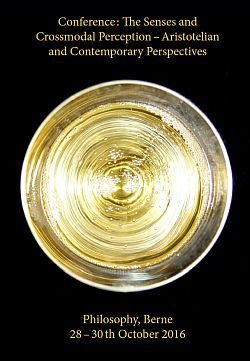 scrutiny in the last twenty odd years, but connections to contemporary work on the senses have been largely neglected. This workshop aims to bring together philosophers of perception and historians of philosophy to investigate what they can learn from one another about how the modes of perception interact, interfere, and enhance one another.
Registration: richard.king@philo.unibe.ch
the programme: