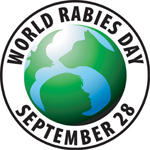 World Rabies Day is held on 28th September each year, and is sponsored by the Global Alliance for Rabies Control - a leading charity for which Prof. Sarah Cleaveland in our Institute is a founding director. The day is an occasion to unite people against rabies and to raise awareness about this deadly disease, which despite being wholly preventable still kills over 69,000 people each year, primarily those living in poor and rural communities in Africa and Asia, with children most at risk.

In keeping with this theme, members of our Centre wrote several perspective pieces on rabies control. The first, which is freely available, highlights how integrated - or 'One Health' - approaches are at the heart of all successful rabies efforts. Continuing a conversation among veterinary practitioners and researchers, the piece presents rabies control as a test case to promote strong partnerships and communication between animal and human health sectors.

Following the release of the Science paper, Dr Katie Hampson - Wellcome Trust Research Fellow in the Boyd Orr Centre and Institute of Biodiversity, Animal Health & Comparative Medicine - wrote a perspective piece for The Conversation UK discussing the consequences of rabies in people and the requirements for control.