Research at the BHF Centre of Research Excellence

While inflammatory mechanisms of atherosclerosis are well defined, recent studies suggest that immune dysregulation plays a role in development of early stages of endothelial dysfunction and hypertension itself at early stages of vascular disease. The mechanisms of immune involvement at early stages of cardiovascular disease are not known. Substantial evidence shows that perivascular infiltration of immune cells (adventitial and perivascular fat) including T cells, macrophages, dendritic cells and B cells is important in the regulation of vascular dysfunction and hypertension. Regulation of this process is not clear. There are two major distinct pathways discussed (1) local activation of immune dysfunction in the vessel wall through neoantigens and (2) the effect of systemic peripheral inflammatory disorders which affect immune dysfunction of these cells.

The immune response plays a key role in CVDs and my current research is focused on understanding what drives this response and how it is regulated. Over the years, I have continued to drive innovative approaches to understanding immune mechanisms in atherosclerosis. We have developed techniques to track antigen presenting cells and antigen presentation in atherogenesis (ATVB 2012;32:2569-79; Circulation 2014;130:1363-73). We have been amongst the first to apply multiphoton microscopy in experimental atherosclerosis (Circulation 2007;115:e326-8) and stroke (Stroke 2011;42:1429-36) with the aim to define the kinetics and anatomical location of the T cell-APC interactions which underlie vascular immune response in real-time in vivo. Recent work on the role of artery tertiary lymphoid organs in atherosclerosis revolutionised our understanding of vascular adaptive immune responses and mechanisms of T cell activation in advanced atherosclerosis (Immunity 2015;42:1100-15).

As part of the BHF Centre of Excellence in Vascular Science and Medicine the partnership with Profs Tom Guzik, Gerry Graham and Iain McInnes will enable optimal convergence of cardiovascular and immune expertise in Glasgow. The overarching objective is to investigate mechanism(s) whereby immune cells, in particular T lymphocytes and antigen presenting cells, trigger hypertension, in order to identify new biomarkers and drug targets for future therapeutic interventions.

Table: Selected overlapping strengths of Institute of Cardiovascular and Medical research and Institute of Immunity, Inflammation and Infection which will play a key role in the Excellence Award projects

This could comprise projects encompassing 3 themes:

1. “Immune dysregulation of cytokine and chemokine networks in hypertension and vascular dysfunction”
2. “Resolution of inflammation in HTN and early atherosclerosis.”
3. “Danger signal sensing in the vessel wall in initiation of immune dysregulation.” 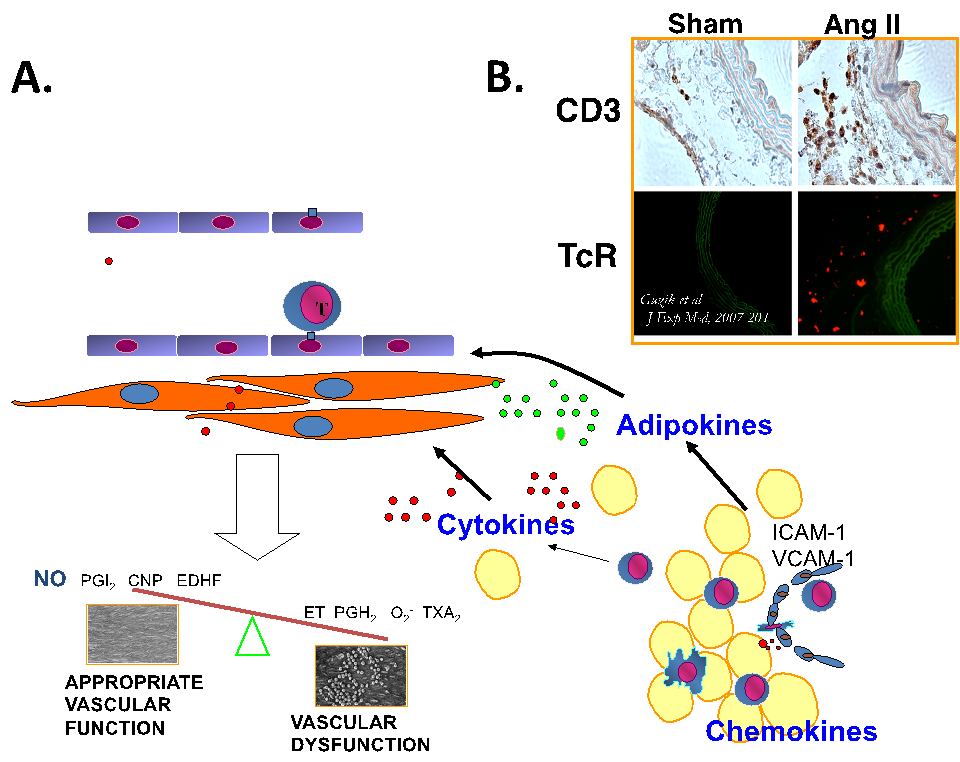 Redox biology of vessels in health and disease

Dysregulation of Notch3 plays an important role in vascular  remodeling and small vessel disease in humans as evidenced in patients with cerebral autosomal dominant arteriopathy with subcortical infarcts and leukoencephalopathy (CADASIL), a vascular dementing disease caused by mutations in the NOTCH3 gene. CADASIL is characterized by degeneration of vascular smooth muscle cells and accumulation of the extracellular domain of Notch3 receptor (N3ECD) on the VSMCs of small and middle-sized arteries.  The gene abnormality is a missense mutations leading to an uneven number of cysteine residues in epidermal growth factor–like repeats in the N3ECD. Exact molecular mechanisms underlying the disease and clinical phenotype remain unclear although misfolding of Notch3 may cause endoplasmic reticulum stress and activation of unfolded protein response, leading to increased reactive oxygen species, oxidative stress and altered vascular smooth muscle cell function. Aberrant vascular signalling in CADASIL may not be a direct effect of altered Notch3 but a secondary phenomenon in response to oxidative stress.

Although there are some suggestions that Notch3 dysregulation is linked to protein misfolding and oxidative stress in small vessel disease in CADASIL, exact mechanisms are unclear. Also, while small vessels in the brain have been well phenotyped in CADASIL patients it is unknown whether peripheral vessels also undergo remodelling and vascular injury, especially since the mutation is ubiquitous.

Researchers at ICAMS have access to the largest Scottish cohort of patients with CADASIL. With expertise in vascular biology, cell signalling, redox biology, non-invasive imaging of small arteries and novel approaches to directly examine small arteries, ICAMS researchers are in a unique position to study molecular and cellular mechanisms, particularly related to oxidative and ER stress, whereby the Notch3 mutation causes small vessel disease in CADASIL patients and provide insights into the role of Notch3, reactive oxygen species, and vascular remodelling in cardiovascular disease.

The following research questions will be addressed using a multidisciplinary approach from non-invasive imaging to molecular/cell/vascular biology:

Findings from these studies will facilitate a better understanding of the pathophysiology of CADASIL with a goal to new treatments. Moreover, these studies will shed light on molecular mechanisms contributing to small vessel disease and vascular remodelling in other pathologies, such as hypertension, diabetes and heart disease.

Reactive oxygen species (ROS) and redox signaling regulate many processes in physiological conditions and are of major importance in vascular biology. Aberrant redox status has been associated with numerous pathologies including cardiovascular disease such as ischaemia/reperfusion injury, heart failure, atherosclerosis, stroke, diabetes and hypertension. Common to these diseases is vascular damage involving endothelial dysfunction, vascular remodeling and inflammation, processes which are sensitive to oxidative stress.

Redox signaling is complex and it is still unclear exactly how ROS modify particular targets and how they induce differential cellular responses. Recent evidence indicates the importance of redox compartmentalisation, where oxidative and reductive modifications are regulated in a spatio-temporal manner. ROS generation and thiol oxidation of proteins in different cellular compartments regulate cell signaling, protein trafficking and regulation of enzyme, receptor, transporter and transcription factor activity. Thus oxidizable thiols are control elements organized in redox circuits that are physically, spatially and temporally separated so that they can function independently to regulate different biological processes. Under pathological conditions, oxidative stress overwhelms these systems leading to aberrant and dysregulated redox compartmentalization and signaling and consequent cell dysfunction.

Of the many diseases where oxidative stress has been implicated to play an important role in vascular injury is hypertension. Our group has demonstrated that in experimental and human hypertension, vascular redox signaling is altered and ROS generation is amplified through process that involve hyperactivation of NADPH oxidases (Noxs). Of the 7 Nox isoforms, vascular Nox1, Nox4, and Nox5 seem to be particularly important in human vascular disease, with Nox1 playing a role in atherosclerosis, Nox4 in cardiovascular complications of diabetes and Nox5 being important in hypertension. Activation of specific Nox isoforms leads to generation of different ROS (O2-· versus H2O2 versus NO) and differential redox signaling, which impacts on downstream cellular responses and vascular function. Exactly how these processes are regulated and what drives ROS to signal through different targets to cause a vascular phenotypic change in hypertension is elusive, but redox compartmentalisation may be very important.

In order to examine the relationship between ROS generation, redox signaling and vascular cell(dys)function it is important to identify what species are generated, in what amount and to carefully characterize them in a spatio-temporal manner. Moreover, linking these processes to specific ROS-generating oxidases and Nox isoforms, that are localized in discrete compartments, will provide insights into the subcellular mechanisms that regulate vascular ROS formation in health and cardiovascular disease.

Using novel chemical probes for H2O2, which in combination with self-labelling proteins, enable the quantification of this molecule in specific compartments, we track the generation of ROS in subcellular locations in vascular cells in real time.  These studies will provide new information to better understand the role of ROS and oxidative stress in vascular (patho)biology. We study human vascular smooth muscle cells (VSMC) and endothelial cells from healthy individuals and patients with cardiovascular disease as well as cells from experimental models of human disease.. Redox signaling and oxidative proteomics underlying vascular dilation/constriction, fibrosis, hypertrophy and inflammation are assessed using molecular/cell biology approaches and oxidative proteomics.

Comparisons of adults in extremes of social class in Glasgow has already revealed that considerable differences exist in cardiovascular risk factor burden (pSoBid study, BMJ, 2009). This project aims to determine whether a range of cardiovascular and metabolic risk factors already differs across extremes of social class in older children / young adults in Glasgow. The measurements will include classical risk factors, details of family history, vascular function and novel blood biomarkers such as epigenetics and metabolomics. In so doing, we will establish whether and to what extent socially patterned cardiovascular and diabetes risks are already set in motion at an early age.

There is considerable evidence for an association of socioeconomic deprivation on cardiovascular risk independent of traditional risk factors. Indeed, postcode as means to define socioeconomic deprivation makes an important contribution to cardiovascular risk scoring in the UK in QRISK2 and ASSIGN risk scores. The mechanisms behind this independent association have been investigated and several pathways are postulated to be involved. These include low grade inflammation, elevations in stress hormones, alterations in adiposity and nutritional indices, as well as changes in haemostatic variables. Whilst there is considerable data documenting differences in adults stratified by socioeconomic status, there is a dearth of such work in children and /or young adults. We are planning to conduct such a study in Glasgow where gradients in SES are profound.

Our work, which is in the process of development, will aim to characterise several aspects of risk inclusive of:
• traditional risk factors (BP, lipids, family histories)
• assessment of health behaviours including diet and physical activity assessments
• assessment of adiposity inclusive of bio impedance
• inflammatory pathways with addition of leucocyte phenotyping,
• metabolomics and if possible proteomic patterns in peripheral blood
• Epigenetic signals in peripheral blood
• Vascular function measurement – likely ENDO-PAT as objective measure not operator dependent

In so doing, we will attempt to determine whether and which cardiometabolic signals are altered in the young from deprived communities and whether these are related to lifestyle behaviour measures and directly measured vascular function. The findings may have implications for health policy in relation to tackling social deprivation-related health gradients.

The interface between cancer and the cardiovascular system is increasingly relevant. Advances in cancer therapeutics have provided major improvements in the prognosis for patients with a wide range of cancers and treatment is frequently given with curative intent.

However, many chemotherapy agents, both established and novel, are associated with a wide range of cardiovascular toxicities including heart failure, thrombosis and hypertension. At times, these acute effects can be a more pressing concern than the index cancer diagnosis and the latent cardiovascular effects of these treatments remains relatively under-addressed.  Strategies to diminish these risks without compromising cancer treatment are under-explored.

My translational studies of vascular biology employ a range of techniques to examine the cardiovascular toxicity of chemotherapy drugs in man. My particular interests are in the endothelial mechanisms underlying the hypertensive effects of VEGF inhibitors and the pro-thrombotic effects of platinum-based chemotherapy. We aim to explore preventive strategies to minimise acute and chronic cardiovascular toxic effects whilst simultaneously maintaining effective cancer treatment.

Small Vessel Disease of the Brain

Small Vessel Disease of the Brain

This is a new subgroup composed of clinicians and basic scientists specialising in small vessel disease of the brain, and is currently being developed.