An academic from the University of Glasgow has been elected to one of Europe’s foremost research bodies, the Academia Europaea (Academy of Europe). 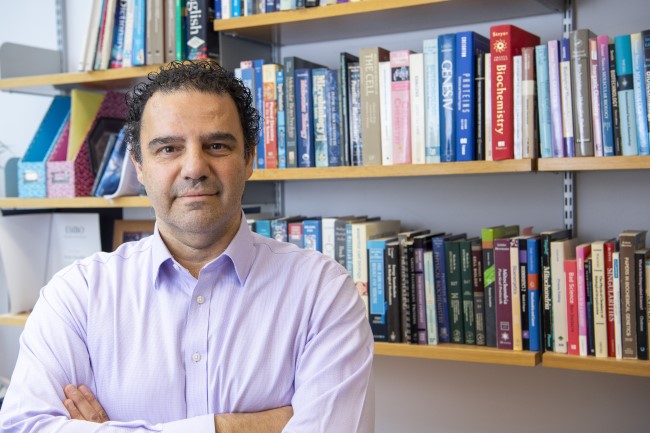 Professor Kostas Tokatlidis, from the University of Glasgow’s School of Molecular Biosciences, was elected on the strength of his worldwide reputation in the field of Mitochondrial Biology, having pioneered seminal work in the discovery of several novel mechanisms of mitochondria biogenesis and the links of mitochondria dysfunction to health and disease. His election reinforces the University of Glasgow’s outstanding reputation, strengths and potential in mitochondrial research.

Academia Europaea is a pan-European academy of science, humanities and letters, with a membership of more than 5,000 European eminent scholars, elected on a global basis. Amongst them are 79 Nobel Laureates, several of whom were elected to the Academia before they received the prize.

Professor Tokatlidis is currently leading the creation of a new Mitochondrial Integrative Research Centre in Glasgow that brings together a number of groups across Colleges, working on complementary and innovative aspects of Mitochondrial Biology with potential development of new mitochondria-targeted approaches for therapeutic applications.

Membership of the Academia Europaea is by invitation and made only after peer group nomination, scrutiny and confirmation, as to the scholarship and eminence of the individual as foremost academics in their field. The aim of the Academy is to promote European research, advise governments and international organisations in scientific matters, and further interdisciplinary and international research.

Professor Tokatlidis, the University of Glasgow Cathcart Chair of Biochemistry and Director of Research of the School of Molecular Biosciences, said: “I am delighted for this outstanding honour, and I feel grateful for all the efforts of my research group over the years.

“I have benefited from working in the European research area early in my career from several European mobility programs have trained at the Pasteur Institute in Paris and the Biozentrum in Basel after my first degree at the Aristotle University of Thessaloniki, Greece and have maintained very active and long-term collaborations with several European groups after setting up my group in Manchester and then moving to Crete and Glasgow. I am excited to be part of a very vibrant, dynamic and creative environment for mitochondrial research at the University of Glasgow.”

Professor Tokatlidis has previously received a number of honours and awards for his research achievements. He is a Fellow of the Royal Society of Edinburgh (RSE), the Royal Societies of Chemistry and Biology, a member of the European Molecular Biology Organisation, a Royal Society-Wolfson Research merit fellow and a Fulbright scholar.
His research is largely interdisciplinary at the interface of biology and chemistry and has been funded by UKRI, the Wellcome Trust, the Leverhulme Trust, the Royal Society and international funders like the EU, the Human Frontiers Program Organisation and the Roche Foundation.

He is also a co-founder (in collaboration with the Glasgow School of Art and the University of Toronto and supported by the UK’s leading mitochondrial disease charity the Lily Foundation, the Biochemical Society and the RSE) of a global Mitochondrial Collective that aims to pioneer and reshape mitochondria collaborative research at a global scale transcending disciplines from biology to medicine to arts, design and social sciences.

The Academy of Europe