A ‘monkey media player’ which lets zoo animals choose between video and sound files suggests they may prefer to spend more of their time listening than watching.

The player is the latest development in ongoing zoo enrichment research from animal-computer interaction specialists at the University of Glasgow in the UK and Aalto University in Finland.

Enrichment activities for zoo animals are important for maintaining their physical and mental health and improving their quality of life. Some zoos are already using computer-based, interactive enrichment systems with primates like gorillas, chimps and orangutans. The touchscreen systems are designed to entertain and engage the animals with interactions to stimulate cognition in ways comparable to activities they might undertake in the wild.

The researchers set out to explore how a group of three white-faced saki monkeys at Korkeasaari Zoo in Helsinki would respond to being able to trigger audio or visual stimuli on demand, like a primate-focused Spotify or Netflix. The system is the first of its kind to offer monkeys a choice of stimuli.

To do so, they built a computer interface contained in a small wood-and-plastic tunnel which they placed in the monkeys’ enclosure. Infrared sensors created three equally-sized interactive zones inside the tunnel. When monkeys moved through an infrared beam, it would trigger either a video or a sound on a screen in front of them which played for as long as they chose to stay.

The device was in the sakis’ enclosure for a total of 32 days. For the first seven days, the tunnel was silent to allow them to get used to its presence. For the next 18 days, they could choose between an audio or video stimulus which changed every few days. Over the course of the experiment, those stimuli were rain sounds, music or traffic noise, or videos of worms, underwater scenes, or abstract shapes and colours.

Each time they interacted with the system, it automatically recorded what was playing, and how long they spent in the interactive zone which triggered the content to play. Finally, for seven days at the end of experiment, the tunnel returned to being non-interactive once more. 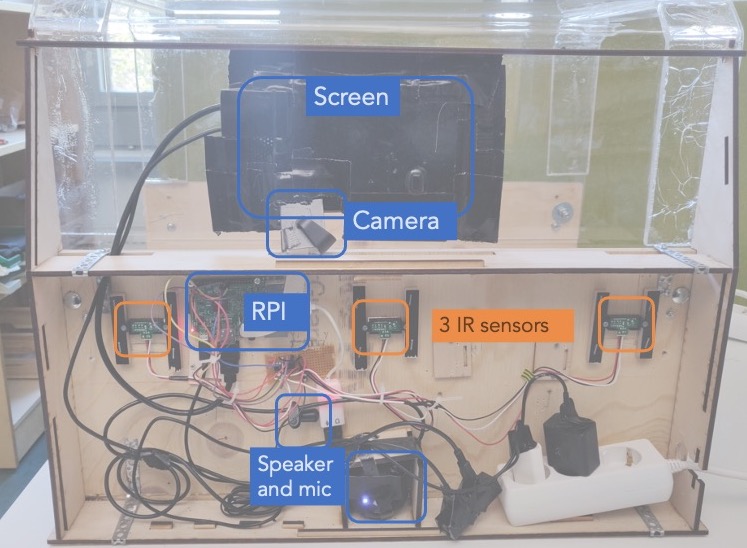 While the audiovisual stimuli elements of the tunnel were active, the sakis’ interactions were mostly short, lasting a few seconds each time as they walked or ran through the system – mirroring how they interact with more familiar elements in their enclosure.

The research was led by Dr Ilyena Hirskyj-Douglas of the University of Glasgow, along with colleague Vilma Kankaanpää of Aalto University in Finland.

It builds on the pair’s previous research using a similar system which measured sakis’ interactions initially with video alone and then with audio alone. This is the first time that the sakis had the option of interacting with both stimuli.

Dr Hirskyj-Douglas, of the University of Glasgow’s School of Computing Science, said: “We’ve been working with Korkeasaari Zoo for several years now to learn more about how white-faced sakis might benefit from computer systems designed specifically for them. Previously, we have explored how they interacted with video content and audio content, but this is the first time we’ve given the option to choose between the two.

“Our findings raise a number of questions which are worthy of further study to help us build effective interactive enrichment systems. Further study could help us determine whether the short interactions were simply part of their typical behaviour, or reflective of their level of interest in the system. Similarly, their varying levels of interaction over time could be reflective of how engaging they found the content, or simply that they were becoming habituated to the tunnel’s presence in their enclosure. While they chose audio more regularly than video, the results weren’t statistically significant enough for us to know for sure what they prefer.

“Animal-computer interaction is still an emerging field of research. The data we collected in this study will be part of further developments as we learn more about their habits and preferences. The ultimate goal for us is to bridge the gap between human understanding of how animals access and experience computer systems to create meaningful and relevant experiences for monkeys.”

Kirsi Pynnönen-Oudman, research coordinator at the Helsinki/Korkeasaari Zoo, added: “Very little research has been done on the Pitheciidae-family monkeys and their enrichment at the zoos. This study on the white-faced saki monkeys gives us valuable data how to use different enrichment items for these New World monkeys. They live in the lower canopy of the rainforest of Brazil, Guyana, Suriname and Venezuela.  In general, saki monkeys (Pithecia pithecia) are not very intensively studied, not in the wild, nor in the captivity.

“This kind of new information will help the conservation efforts of this species both in in the wild and in captivity. Sakis have a breeding program, called the EAZA Ex situ programmes, running in European zoos. The program coordinator visited our zoo recently and was very interested of the studies made on them using the computer based animal-driven choice tunnels.”

The research results will be presented at the ACM SIGCHI Conference on Designing Interactive Systems, which runs between 13 and 17 June 2022. An accompanying research paper, ‘Do Monkeys Want Audio or Visual Stimuli? Interactive Computers for Choice with White-Faced Sakis in Zoos’, will also be made available online.