The publication of a new catalogue of gravitational wave detections from the LIGO Scientific Collaboration and the Virgo Collaboration is providing valuable new insight into the workings of the universe.

The catalog contains 39 new signals from black-hole or neutron-star collisions detected between April 1 and October 1, 2019, which more than triples the number of confirmed detections since the first detection of gravitational waves in September 2015.

The new set includes some of the most interesting systems seen by the detectors to date, and enables qualitatively new studies of astrophysical populations and fundamental physics.

Researchers from the University of Glasgow’s Institute for Gravitational Research, who have been key partners in the LIGO and Virgo collaborations since their inception, contributed to the technical and analytical upgrades which made these detections possible. 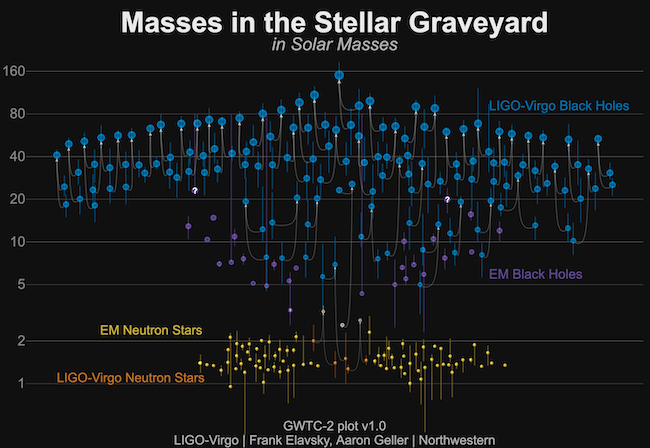 Dr John Veitch, a senior lecturer at the University of Glasgow’s School of Physics and Astronomy, was a significant contributor to the science of the paper. He said: “These 39 new detections represent the results of our most advanced and effective observing run yet. The detectors could reach more than three times more volume than in the previous run, and our search pipelines were more capable of picking signals out of the background noise of the universe.

“That has helped us collect this remarkable crop of detections, only four of which have been published before. Many of them will be new even to the astronomy community, because 13 of them were pulled from a deep-dive of the data collected during the run instead of issued as live alerts at the moment of detection.

"During this run we were making, on average, more than one detection per week, and they will arrive even faster in the next observing run as the detectors keep improving. Every detection helps fill in some of the blanks in our understanding of the universe with valuable new data about a black hole’s mass or spin, for example.

“Taken together, they help us build our statistical database. That allows us to use the details of the observations to do things like more effectively testing the theory of General Relativity and put tighter constraints on our expectations of how black holes are created.”

Prior to the beginning of the observing run, the detectors’ laser power was increased, their mirrors were improved, and quantum squeezing technology was incorporated.  All together, these enhancements resulted in a roughly 60% improvement in the distance to which signals can be detected. The detectors were also able to operate without interruption more often than in the past, with an improved duty cycle of around 75%, where previously it was about 60%.

With all of these new signals, the collaboration can begin to better understand the populations of black holes and neutron stars. By analyzing the entire population of binary black hole mergers simultaneously, they can maximize the astrophysical information they extract.

One key observation is that the distribution of black hole masses does not show a simple relationship between the number and the masses of the black holes. Measuring the deviations from this relationship, which scientists call a ‘power law’, will enable researchers to learn about the formation of these black holes, either as the result of stellar deaths or previous collisions.

Considering the entire population together also allows researchers to make stronger measurements of difficult to measure properties such as black hole spin. They have found that some merging black holes have spins which are misaligned with the plane of their orbit.This will allow future probes of the regimes in which these binaries formed.

The results reported in the new catalog correspond to only the first six months of LIGO and Virgo’s third observing run. Results from the remaining five months are currently being analyzed.

Professor Sheila Rowan, director of the University of Glasgow’s Institute for Gravitational Research, said: “It’s amazing to think that, five years on from the first detection of gravitational waves, we’re now in a position where we can publish details of 39 detections at once.

“That first detection was the culmination of decades of hard work by a remarkable international collaboration. All the detections we’ve made since then are the result of even more hard work to upgrade the detectors, improve their sensitivity, and keep them working for longer during each observing run.

“Our next run will bring together LIGO, Virgo and, for the first time, the Japanese detector KAGRA, creating an even more capable gravitational wave astronomy network. We’re excited to keep pushing the boundaries of what we are capable of detecting and to continue to deepen our understanding of our universe.”

The detections were only made possible by combining UK innovations in technology, sustained international funding, and enormous dedication and hard work by more than a thousand scientists from around the world. The LIGO Scientific Collaboration comprises over 1,300 scientists from 18 countries, and includes researchers from 11 UK universities (Glasgow, Portsmouth, Birmingham, Cardiff, Strathclyde, West of Scotland, Sheffield, Edinburgh, Cambridge, King College London and Southampton), supported by funding from the Science and Technologies Funding Council (STFC) .