Two endangered species of sea turtle are using diversionary tactics to protect their nests, according to research led by the University of Glasgow.

When female sea turtles cover their nest chambers in which they have laid their eggs, they spend considerable time and effort on scattering sand around the next site. Yet extending their time on the beach in this way exposes them to risks such as predation and exhaustion. 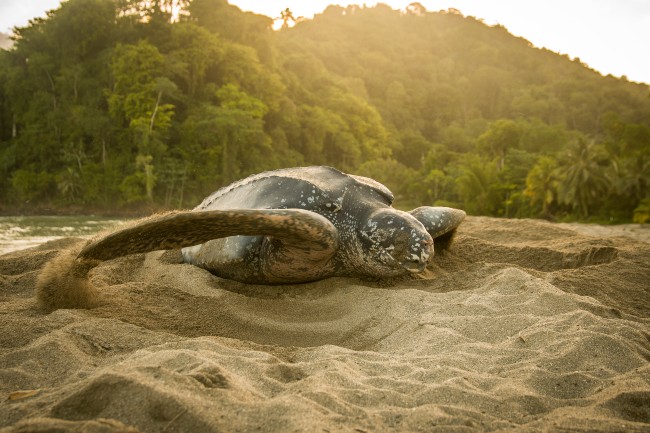 It has been presumed that this activity was a means of camouflaging the nest site from egg predators but its probable true function has not been identified – until now.

The paper deals with how two endangered species of sea turtle, leatherbacks and hawksbills, invest a considerable amount of time and energy to protect their eggs before the females leave to return to the sea. They do this after they have completed nesting and expose themselves to danger and exhaustion to complete the process.

Professor Malcolm Kennedy, Professor of Natural History at the University of Glasgow, said: “Our research sheds new light on the behaviour of nesting marine turtles. We closely followed the activity and movements of hawksbill and leatherback turtles during the final ‘sand scattering’ phase of nesting. Our findings strongly support the idea that they create a series of decoy nests away from the nest itself to reduce discovery of their eggs by predators.

"This may explain why, despite all the extra risks, female turtles stay on the beach away from the safety of the sea, working to enhance the safety of their eggs. They can spend longer doing this than for any other part of the elaborate nesting process. Remarkably, we found similar behaviours in two species of turtle that shared a common ancestor over 100 million years ago, while dinosaurs still ruled the land. What they do must be extremely important to their offspring, which they will leave behind as eggs in the sand and never see.”

The research paper “Buried treasure—marine turtles do not ‘disguise’ or ‘camouflage’ their nests but avoid them and create a decoy trail”, published in the Royal Society Open Science journal, unveils the findings of a team led by Professor Kennedy.

Leatherbacks are the species that appears to be nesting better this year because the pandemic lockdown has left their nesting beaches in peace. Which emphasises the care with which turtles must find safe places to deposit their eggs.

The research was organised by Professor Kennedy and Tom Burns, the first author, who together realised that conventional ideas about the last phase of sea turtle nesting needed radical correction. The work stretched periodically over seven years while the two joined University of Glasgow Exploration Society expeditions to Trinidad and Tobago, involving work by them and dedicated undergraduate students late into the night on remote nesting beaches.