An unusual gravitational wave signal is casting new light on the ‘mass gap’ between neutron stars and black holes.

When the most massive stars die, they collapse under their own gravity and leave behind black holes. When stars that are a bit less massive than this die, they explode in a supernova and leave behind dense, dead remnants of stars called neutron stars.

On August 14 last year, the National Science Foundation's Laser Interferometer Gravitational-Wave Observatory (LIGO), based in the USA, and the European Virgo detector picked up a gravitational wave signal from the merger of two astronomical objects which could help develop scientists’ understanding of the mass gap.

A paper about the detection is published today in The Astrophysical Journal Letters. 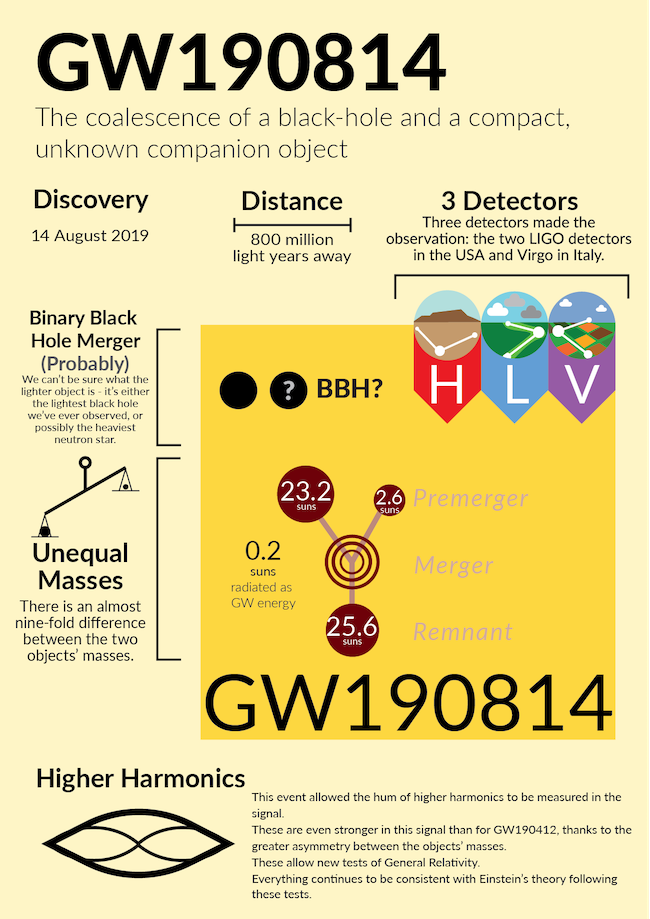 The signal, dubbed GW190814, is the result of a black hole 23 times the size of our sun merging with a second object around 2.6 times larger than our sun. At a ratio of 9:1, it is the largest difference in masses yet observed during a collision by gravitational wave astronomers.

The merger created a new black hole 26 solar masses in size and caused a blast of energy in the form of gravitational waves, which rippled out across spacetime like when a rock is dropped into a pond. About 800 million years after the collision occurred, those ripples finally reached Earth and passed through the ultra-sensitive LIGO and Virgo gravitational wave detectors.

Researchers from the University of Glasgow’s Institute for Gravitational Research (IGR) played a key role in the data analysis which made sense of the signal.

Dr Christopher Berry, recently appointed lecturer in the IGR, said: “This discovery is exciting—it may be the collision of a neutron star and a black hole—something we have been long searching for.

“Our first discovery of gravitational waves in September 2015 came from the merger of two black holes. In August 2017 we found two merging neutron stars. We were just missing a neutron–star black hole merger to complete the set!

“Each new observation tells us more about the nature of black holes and neutron stars. In this case, we are not sure if the lighter object was a neutron star or a black hole—it is an enticing mystery. Figuring out how such a system could have formed will transform our understanding of how stars live and die.”

Professor Sheila Rowan, director of the IGR, said: “This discovery was made during the third observing run (O3) of Advanced LIGO, after the collaboration worked together to make significant upgrades to the sensitivity of the detectors.

“It’s possible that that we might have missed it altogether if we hadn’t taken that time to reflect on and learn from our early successes.  Instead, during O3 we observed a steady stream of candidate events almost daily, which not only allows us to make exciting new discoveries like this but also to build our statistical base of gravitational wave detections. Our next upgrade, Advanced LIGO Plus, promises to bring us an even greater volume of novel detections and further advance the field of gravitational wave astronomy.”

When the LIGO and Virgo scientists spotted this merger, they immediately sent out an alert to the astronomical community. Dozens of ground- and space-based telescopes followed up in search of light waves generated in the event, but none picked up any signals.

Prof Vicky Kalogera, a a professor at Northwestern University, said: “We've been waiting decades to solve this mystery. We don't know if this object is the heaviest known neutron star, or the lightest known black hole, but either way it breaks a record."

"This is going to change how scientists talk about neutron stars and black holes," says co-author Patrick Brady, a professor at the University of Wisconsin, Milwaukee, and the LIGO Scientific Collaboration spokesperson. "The mass gap may in fact not exist at all but may have been due to limitations in observational capabilities. Time and more observations will tell."

Future observations with LIGO, Virgo and possibly other telescopes may catch similar events that would help reveal whether additional objects exist in the mass gap.

The University of Glasgow’s contribution to the LIGO collaboration is funded by the Science and Technologies Funding Council (STFC) alongside the Universities of Birmingham, Cardiff, Strathclyde, West of Scotland, Sheffield, Edinburgh, Cambridge, King College London and Southampton.