A 50-year-old theory that began as speculation about how an alien civilisation could use a black hole to generate energy has been experimentally verified for the first time in a Glasgow research lab.

In 1969, British physicist Roger Penrose suggested that energy could be generated by lowering an object into the black hole’s ergosphere – the outer layer of the black hole’s event horizon, where an object would have to move faster than the speed of light in order to remain still.

Penrose predicted that the object would acquire a negative energy in this unusual area of space. By dropping the object and splitting it in two so that one half falls into the black hole while the other is recovered, the recoil action would measure a loss of negative energy – effectively, the recovered half would gain energy extracted from the black hole’s rotation. The scale of the engineering challenge the process would require is so great, however, that Penrose suggested only a very advanced, perhaps alien, civilisation would be equal to the task.

Two years later, another physicist named Yakov Zel’dovich suggested the theory could be tested with a more practical, earthbound experiment. He proposed that ’twisted’ light waves, hitting the surface of a rotating metal cylinder turning at just the right speed, would end up being reflected with additional energy extracted from the cylinder’s rotation thanks to a quirk of the rotational doppler effect.

But Zel’dovich’s idea has remained solely in the realm of theory since 1971 because, for the experiment to work, his proposed metal cylinder would need to rotate at least a billion times a second – another insurmountable challenge for the current limits of human engineering.

Now, researchers from the University of Glasgow’s School of Physics and Astronomy have finally found a way to experimentally demonstrate the effect that Penrose and Zel’dovich proposed by twisting sound instead of light – a much lower frequency source, and thus much more practical to demonstrate in the lab.

In a new paper published today in Nature Physics, the team describe how they built a system which uses small ring of speakers to create a twist in the sound waves analogous to the twist in the light waves proposed by Zel’dovich. 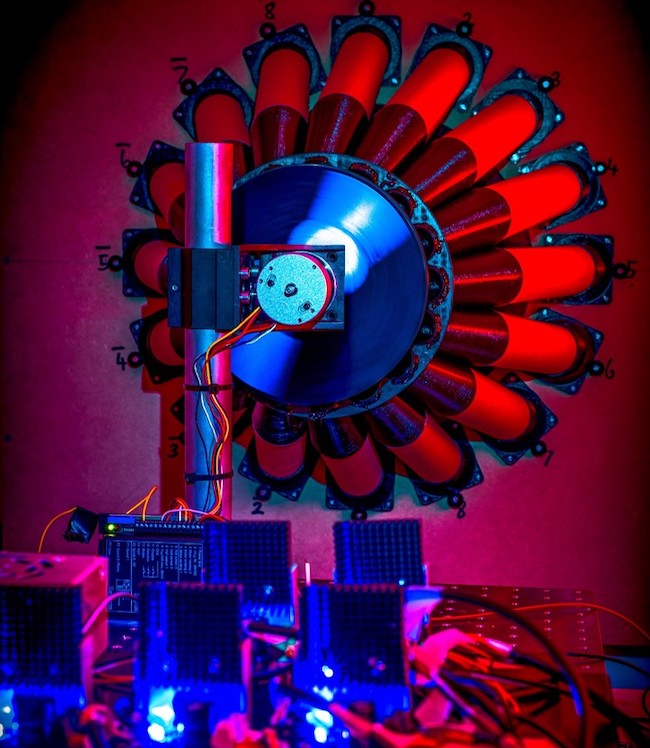 Those twisted sound waves were directed towards a rotating sound absorber made from a foam disc. A set of microphones behind the disc picked up the sound from the speakers as it passed through the disc, which steadily increased the speed of its spin.

What the team were looking to hear in order to know that Penrose and Zel’dovich’s theories were correct was a distinctive change in the frequency and amplitude of the sound waves as they travelled through the disc, caused by that quirk of the doppler effect.

Marion Cromb, a PhD student in the University’s School of Physics and Astronomy, is the paper’s lead author. Marion said: “The linear version of the doppler effect is familiar to most people as the phenomenon that occurs as the pitch of an ambulance siren appears to rise as it approaches the listener but drops as it heads away. It appears to rise because the sound waves are reaching the listener more frequently as the ambulance nears, then less frequently as it passes.

“The rotational doppler effect is similar, but the effect is confined to a circular space. The twisted sound waves change their pitch when measured from the point of view of the rotating surface. If the surface rotates fast enough then the sound frequency can do something very strange – it can go from a positive frequency to a negative one, and in doing so steal some energy from the rotation of the surface.”

As the speed of the spinning disc increases during the researchers’ experiment, the pitch of the sound from the speakers drops until it becomes too low to hear. Then, the pitch rises back up again until it reaches its previous pitch – but louder, with amplitude of up to 30% greater than the original sound coming from the speakers.

Marion added: “What we heard during our experiment was extraordinary. What’s happening is that the frequency of the sound waves is being doppler-shifted to zero as the spin speed increases. When the sound starts back up again, it’s because the waves have been shifted from a positive frequency to a negative frequency. Those negative-frequency waves are capable of taking some of the energy from the spinning foam disc, becoming louder in the process – just as Zel’dovich proposed in 1971.”

Professor Daniele Faccio, also of the University of Glasgow’s School of Physics and Astronomy, is a co-author on the paper. Prof Faccio added: “We’re thrilled to have been able to experimentally verify some extremely odd physics a half-century after the theory was first proposed. It’s strange to think that we’ve been able to confirm a half-century-old theory with cosmic origins here in our lab in the west of Scotland, but we think it will open up a lot of new avenues of scientific exploration. We’re keen to see how we can investigate the effect on different sources such as electromagnetic waves in the near future.”

The research team’s paper, titled ‘Amplification of waves from a rotating body’, is published in Nature Physics. The research was supported by funding from the Engineering and Physical Sciences Research Council (EPSRC) and the European Union’s Horizon 2020 programme.

Link to paper in Nature Physics