Clearest and most detailed images yet of the sun revealed

The clearest and most detailed images of the Sun have been captured by the largest telescope in the world.

Just released first images and videos from the US National Science Foundation’s (NSF) Daniel K. Inouye Solar Telescope reveal unprecedented detail of the Sun’s surface, with experts saying it will enable a new era of solar science and a leap forward in understanding the Sun and its impacts on our planet. 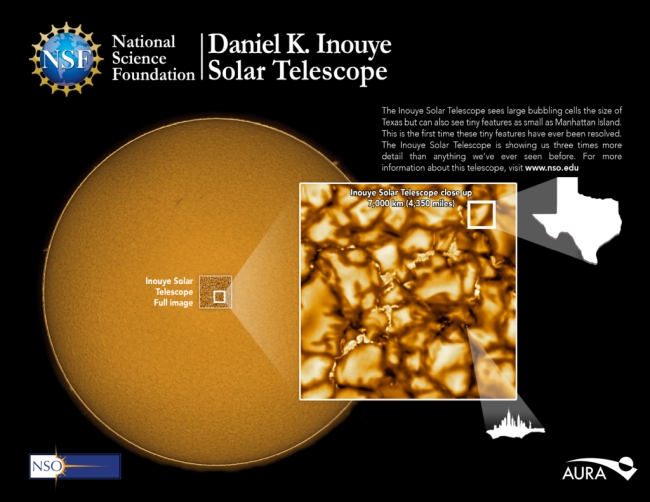 The new images from NSF’s Inouye Solar Telescope, which has a 4-metre mirror – the world’s largest for a solar telescope – and sits near the summit of Haleakalā in Hawaiʻi, show a close-up view of the Sun’s surface including a pattern of turbulent “boiling” plasma that covers the entire Sun. The images also show cell-like structures - each about the size of Texas - which are the signature of violent motions that transport heat from inside the Sun to its surface.

University of Glasgow researchers are part of the UK consortium, led by Queen’s University Belfast, that developed and supplied cameras to the project. Other UK institutes and industry involved are Andor Technology, Armagh Observatory, Mullard Space Science Laboratory, Northumbria University, University of Sheffield, St. Andrews University and University of Warwick, with funding provided by UK Research and Innovation’s Science and Technology Facilities Council. 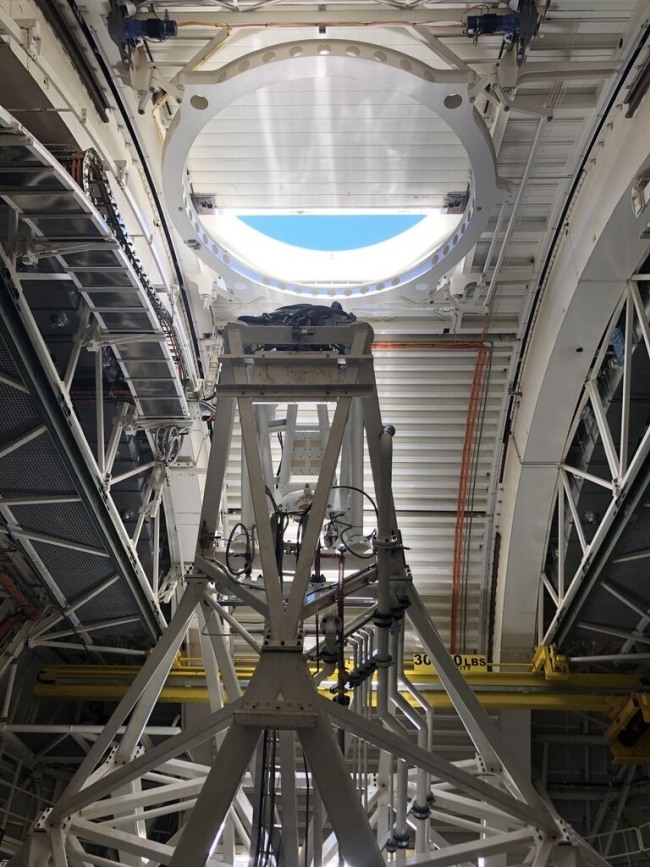 Professor Lyndsay Fletcher from the University’s School of Physics and Astronomy, who is a member of the telescope’s Science Working Group said “These amazing first-light images show the unprecedented capability of the Inouye Solar Telescope to capture details of the Sun’s surface. It is a tribute to the work of the whole project in building this very complex telescope, and to the design and quality of the UK-provided cameras, that the very first images are so astonishingly good.”

“It’s all about the magnetic field,” said Thomas Rimmele, director of the Inouye Solar Telescope. “To unravel the Sun’s biggest mysteries, we have to not only be able to clearly see tiny structures from 93 million miles away but very precisely measure their magnetic field strength and direction near the surface and trace the field as it extends out into the million-degree corona, the outer atmosphere of the Sun.”

Professor Fletcher added: “The Astronomy and Astrophysics Group at the University of Glasgow will be using observations with the Inouye Solar Telescope to investigate solar flares, which are sudden and dramatic bursts of radiation from the Sun’s surface, emitted when its magnetic field suddenly snaps into a new configuration. Solar prominences – dense clouds of gas suspended by the magnetic field above the Sun’s surface – will also be a target. The Sun’s magnetic field is key to understanding these phenomena, and the Inouye Solar Telescope has instruments designed to measure this too, at ultra-high resolution.”

Experts say the telescope will play a critical role in better understanding the Sun and space weather, and will provide important details for scientists.

NSF Director, France Córdova, said, “NSF’s Inouye Solar Telescope will be able to map the magnetic fields within the Sun’s corona, where solar eruptions occur that can impact life on Earth. This telescope will improve our understanding of what drives space weather and ultimately help forecasters better predict solar storms.”

Solar activity and space weather can affect systems on Earth. Magnetic eruptions on the Sun can impact air travel, disrupt satellite communications and bring down power grids, causing long-lasting blackouts and disabling technologies such as GPS.

NSF’s new ground-based Inouye Solar Telescope will work with space-based solar observation tools such as NASA’s Parker Solar Probe (currently in orbit around the Sun) and the European Space Agency/NASA Solar Orbiter (soon to be launched). The three solar observation initiatives will expand the frontiers of solar research and improve scientists’ ability to predict space weather.

“These first images are just the beginning,” said David Boboltz, program director in NSF’s division of astronomical sciences and who oversees the facility’s construction and operations. “Over the next six months, the Inouye telescope’s team of scientists, engineers and technicians will continue testing and commissioning the telescope to make it ready for use by the international solar scientific community. The Inouye Solar Telescope will collect more information about our Sun during the first 5 years of its lifetime than all the solar data gathered since Galileo first pointed a telescope at the Sun in 1612.”