Everledger and the Scottish Universities Environment Research Centre (SUERC) of the University of Glasgow have signed a Memorandum of Understanding (MOU) to join forces to tackle fraud within the whisky industry. The agreement will see SUERC researchers at the University of Glasgow fit intelligent Everledger anti-tamper bottle closures to rare whiskies of which they have been tasked with authenticating the provenance by leading brands, retailers, auction houses and collectors. The Scotch in each individual bottle will be analysed using SUERC’s proprietary technology, and the bottles are then protected and connected to the blockchain using Near Field Communication (NFC) tags, thus holding a digital record certifying the whisky’s origin and age.

SUERC has developed a way to accurately determine when whiskies were distilled using radiocarbon dating. By being granted unprecedented access to samples of the world’s rarest whiskies, its researchers have created a unique radiocarbon dating curve which is now used to determine the age of all types of vintage whiskies. This finely-graded system can, in many cases, pinpoint the true age of old whiskies to within a couple of years, and quickly detect fakes. In fact, research released by SUERC in 2018 showed that of 55 bottles of rare Scotch they had tested, 21 were either fake, or not distilled in the year stated. With the verification of this important information now possible, SUERC’s customers were keen to go further and add an additional element of security to the process to guard against any risk that a rare bottle might be tampered with after it has been dated. 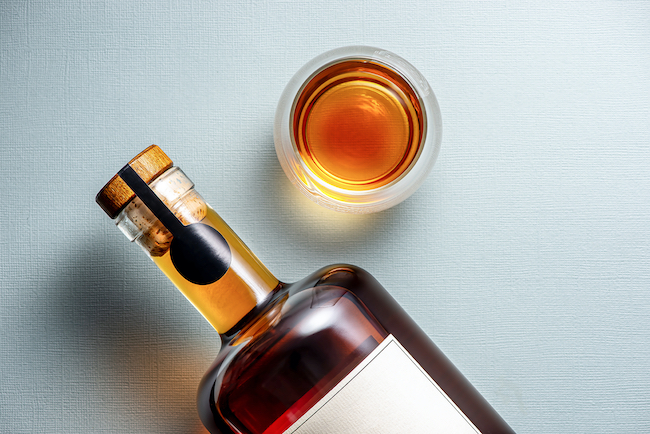 In response to this customer feedback, the team has opted to use Everledger’s intelligent bottle caps and blockchain platform. These smart closures were launched in April 2020 to help the wine and spirits industry tackle the growing challenge of counterfeit alcohol and protect its producers, retailers and auction houses against fraudsters. Once the radiocarbon testing is complete, researchers add an NFC-powered tamper detection label to the bottle cap and create a unique digital identity for that whisky. This enables the digital record and any future chain-of-custody data to be captured through the supporting blockchain technology. And with the tap of a smartphone, the provenance of the bottle and its lifetime journey can be viewed, protecting and even enhancing its overall value. Not only is the tag secure and unique, it is also discrete, retaining the authenticity of the bottle that collectors appreciate.

The Everledger Platform enables transparency across several industries, including wine and spirits, diamonds, gemstones, luxury, apparel, and circular cconomy. The enterprise-grade blockchain platform enables buyers and sellers of high value assets such as rare whiskies to trade with confidence and offer an enhanced customer experience to their end consumers.

Gordon Cook, head of the SUERC Radiocarbon Laboratory and a professor at the University of Glasgow, led the team which developed the carbon-dating verification process, and highlighted: “This method for identifying fake malt whisky samples extends from the removal of small samples through the cork, to alcohol distillation, high precision analysis and finally, interpretation of the radiocarbon data using a unique calibration curve developed by our laboratory. This research has been carried out in response to a growing interest in these whiskies that, if genuine, can be worth tens of thousands of pounds per bottle, which may encourage fraudsters to attempt to fake the more expensive brands. We’re proud that we are now able to provide the first and only fully secure whisky age verification service in the world with the support of Everledger.”

Discussing the partnership with Everledger, Dr Elaine Dunbar, Research Scientist at SUERC, added: “One aspect of the process that has eluded us is securing a permanent digital record of a whisky’s origin and age. We are therefore absolutely delighted to establish a partnership with Everledger who will provide a lasting seal and a digital record of the whisky and details of its radiocarbon analysis. It’s the perfect way to provide additional peace of mind for those who choose to have us verify their whiskies, and to help cut down on the trade in fakes.”

Calogero Scibetta, Everledger’s Senior Vice President of Commercials, Europe, added: “Using technology to bring more and more scientific methods for authentication in the Wine & Spirits industry has been a committed focus for us since day 1, and we are delighted to work with SUERC on whisky authentication and protection. We are honoured that such an institution has chosen to adopt the Everledger Platform as their platform for provenance and authenticity for the industry.”

Everledger already works with several other highly respected laboratories including the Gemological Institute of America (GIA), and Gübelin Gem Lab to improve traceability within the diamond and gemstone industries, and CEO Leanne Kemp sees a trend emerging. “Whether it’s fine whiskies or precious gemstones, the authenticity and backstory can be equally as important as the item itself. Organisations like SUERC lead the way when it comes to protecting, and increasing, the value of these prized assets, while defending the industry from fraudsters. By offering a complete solution including the intelligent bottle closures and the Everledger Platform, we’re helping the likes of SUERC to further enhance the vital work that they do.”