Two new research projects at the University of Glasgow are setting out to consider exploration at different extremes.

One will drill bedrock from beneath the polar ice sheets, with the goal being to retrieve scientific samples, and the other will look at new ways to drill extraterrestrial surfaces to greater depths than have ever been reached before.

Dr Patrick Harkness and Dr Kevin Worrall from the James Watt School of Engineering are leading the engineering research. 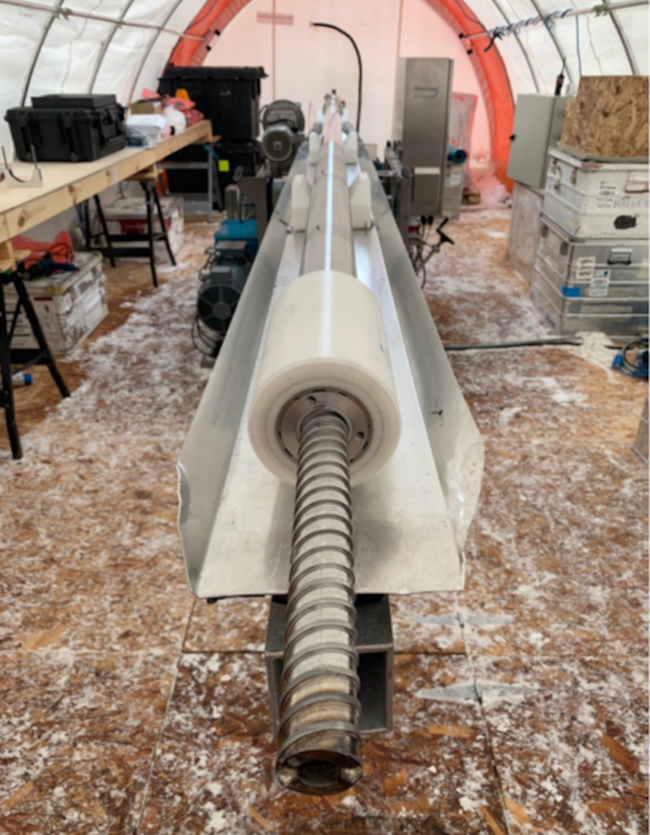 The first project, called INCISED, is led by Durham University, funded by the European Research Council, and has set its sights on the Antarctic. The scientific research team will use the University of Glasgow’s Percussive Rapid Access Isotope Drill (P-RAID) drill technology, which was developed in collaboration with Durham University and the British Antarctic Survey, to take samples of bedrock from underneath the ice sheet.

The P-RAID is a rotary-percussive device that can be lowered from the polar surface to the bedrock. The drill’s hammering action is carefully controlled by an autonomous system, originally developed for space applications, which uses as little force as possible. As a result, the P-RAID system is smaller and lighter than most drilling systems, making it ideally suited for deployment in Antarctica.

Once the rock samples are returned to the UK, they will undergo sophisticated isotope analysis at the Scottish Universities Environmental Research Centre (SUERC) in East Kilbride. The results will help scientists to learn more about when the rocks were last exposed by retreating ice, which will improve our future climate models and help us to understand how much sea level rise could be expected in a warmer world.

The second project, named ‘Deeper’, is supported by the European Space Agency. It aims to build a collapsible drill that would allow future planetary missions to penetrate further below the surface.

Working again with the British Antarctic Survey, and in partnership with industrial partners RolaTube and Apogee Engineering, the team will create a lightweight, flexible drillstring that can be coiled up inside a rover, like a tape measure, when it is not in use. This means that the launch vehicle can be smaller and the mission costs can be reduced.

When the rover reaches an area of interest, the drill will begin to unspool the flattened drill-string. This material will then double over itself to create a pipe, and that pipe can be extended downwards by continuing to rotate the hub. This could allow far deeper drilling than current technology, which uses robotically assembled parts, and therefore enable more detailed analysis from further back in time.

The projects are the latest developments in a series of advanced drilling research projects led by Dr Patrick Harkness and his team. They are supported by a range of funders including the European Union, the UK Space Agency, and the Science and Technology Funding Council’s Impact Acceleration Accounts.

Dr Harkness said: “Comparing the climate histories of two different planets will allow us to unpick how much climate change is natural, and how much has been driven by industrialization. The two activities also support one another technologically: ideas originally developed for space can be put to use in the polar regions, and the experience of deployment to those harsh environments helps to mature technology for space.

“We’re glad to be working with our partners on these two projects which expand the scope of both earthbound and space-based rock sampling, and we’re looking forward to getting out into the field in the coming months.”

Both drills will be integrated at the University of Glasgow, with testing at Saint-Gobain’s Bantycock Quarry in Nottinghamshire next year, and expeditions to Greenland and Antarctica to follow.