Guardians of a unique river in Colombia with its own legal rights have travelled to Scotland to work with academics at the University of Glasgow to help protect and rehabilitate their waterway.

This is part of a larger visit to Europe which has been funded by the Glasgow Knowledge Exchange Fund. 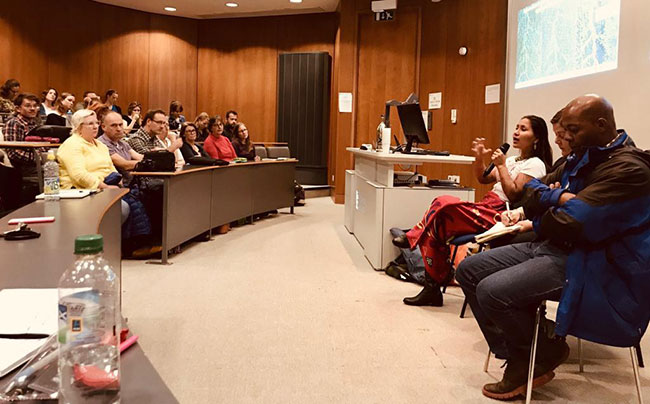 A symposium is being run together with the Scottish Catholic International Aid Fund (SCIAF) and aims to explore how the Scottish Government and academics from Scotland could further support communities living along the River Atrato.

Rivers play a major role in the culture, economy and social life of the people of Chocó, as a means of transport, a way to earn a living and an integral part of daily life. However, gold mining linked to the country’s long-running internal conflict has caused devastating social and environmental damage along the river Atrato.

While the success of the communities in gaining the pioneering global status of the river as a bearer of its own legal rights marked a significant step forward in environmental protection, and in maintaining the livelihoods of local people, it also meant community members now take on the difficult task of acting as protectors of the waterway.

Euma Pedroza, an Indigenous leader and trained lawyer working for indigenous women’s rights, has travelled toScotland with lawyer Oscar Salinas to share their experiences and explore new ways to protect and rehabilitate the river.

Dr Mo Hume from the University of Glasgow, who is the Principal Investigator on the Colombia River Stories Project, said: “We are delighted that our colleagues from Colombia can join us to discuss the major challenges facing communities along the Atrato River. The Atrato is pioneering as the third river in the world and the first in Latin American to be recognised as a subject of rights.

“Raising awareness of this globally significant case is crucial since the Atrato is in one of the world’s top ten biodiversity hotspots where conflict, illegal mining and logging are having a devastating impact on the local environment.

“University of Glasgow academics, together with colleagues from the Universities of Nottingham and Portsmouth, have been researching socio-environmental challenges in the region as the humanitarian crisis worsens. The visit will further strengthen links between Scottish universities, SCIAF and the communities of the Atrato.”

SCIAF’s Programme Officer for Colombia Mark Camburn said: “SCIAF has worked in Chocó since 2006, helping communities gain legal rights to their ancestral territories, develop plans for the sustainable use of their resources, and implement livelihoods projects.

“The River Guardians who are in Scotland this week are tasked with being the “voice” of the river. We hope that by hearing about the challenges they face implementing the legislation which gives the river its own legal rights, we can work together with our colleagues at the University of Glasgow and others to share scientific and environmental knowledge, and continue the rehabilitation of the Atrato.”

The visit comes ahead of the Amazon Synod in the Vatican, a meeting of bishops to discuss the future of the Church in the region, in which the environmental and cultural devastation witnessed in recent decades will also be discussed.

While in Scotland the River Guardians have also met with SCIAF’s Bishop President Joseph Toal and representatives from the Scottish Government to share their experiences and raise awareness of the issues they face.