James Watt engine steams back to life with 3D-printed model

A team of University of Glasgow students have used cutting-edge construction technology to build a model of one of James Watt’s pioneering steam engines, two centuries after his death.

Members of the School of Engineering’s JetX student society spent five months putting together a 3D-printed scale model of a Boulton-Watt steam engine. 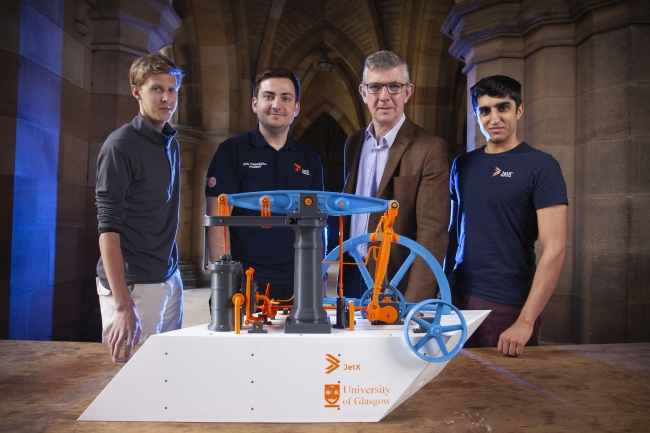 Their model, which is about a metre in length, uses more than 800 parts. The design builds upon the earlier adaptation of Oliver Smith’s drawing for a model-sized beam engine by John Fall.

The result is the largest additively manufactured working model of this design which features over 150 3D-printed parts - a process which took 845 hours of printing in total, consuming more than 2.2km of printing filament in the process. While the original model was run on steam, the model uses an additional gear to move itself and demonstrate the engine’s range of motion at the touch of a button.‌

The model will be on display at the University Library from Thursday 6 June as part of a public exhibition which explores Watt’s life, achievements and legacy.

Watt was working as an instrument-maker at the University of Glasgow when, in 1765, he made improvements to a Newcomen steam engine, adding a separate condenser which made it vastly more efficient. His insight helped kickstart the industrial revolution and create the modern world.

The library exhibition the latest in a year-long series of events at the University to mark the 200th anniversary of Watt’s death, which include a symposium and public lecture on the University campus today (Wednesday June 5).

Also kicking off on Thursday is the 13th annual Glasgow Science Festival, which this year is themed ‘Glasgow STEAMS ahead’ in honour of Watt and will feature numerous Watt-related events during its run until June 16.

Chris Triantafyllou, president of JetX, led on the design and construction of the model. He said: “The past five months have been very busy but we’re really pleased with the final model. The whole building process utilised a lot of design and prototyping practices we've learned throughout the years of developing jet engine models.

“The University of Glasgow is rightly proud of its association with James Watt, and his legacy helps make it an inspiring place to study. We’re glad we’ve had the chance to contribute to the University’s 200th anniversary celebrations, and we hope that visitors to the exhibition in the library get as much enjoyment out of it as we do.”

Professor Colin McInnes is the University’s James Watt Chair, Professor of Engineering Science. He said: “The JetX team have achieved something remarkable with the construction of this model, which is a fitting tribute to the vision of James Watt in this bicentenary year.

“The engine is stunning, and credit to JetX for their imagination, dedication and diligence, not just in this project but also in their self-directed jet engine designs. The School of Engineering is keen to instil in students the importance of creative thinking in engineering, and JetX are a prime example of how creativity can inspire exciting new projects.”

The award-winning JetX Engineering society is a club for jet engine enthusiasts, and provides engineering students with the chance to design, develop and build models of the types of engines used in the modern aerospace industry.

Since the society was established in 2014, its members have successfully completed two sub-scale testing models which include real-time monitoring systems and formed a partnership with the University of Sheffield’s Control, Monitoring & Systems Engineering University Technology Centre.

The Jet-X team’s model will be on display in the University of Glasgow Library on Hillhead Street from Thursday 6 June until the end of the year.

James Watt 2019 at the University of Glasgow