University of Glasgow spin-off company Lynkeos Technology Ltd. has been announced as one of the winners of the 2018 Institute of Physics Business Awards. At a Parliamentary Reception at Westminster yesterday (16 October). Lynkeos received a Business Start-Up Award in recognition of their achievement as a young company with a great business idea based on a physics-based invention. 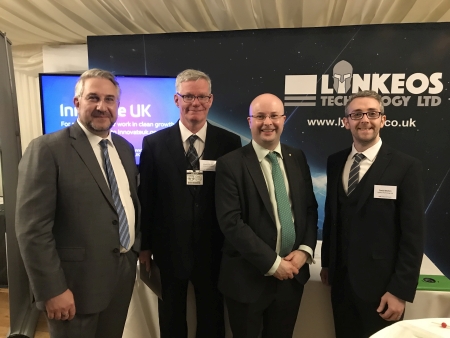 IOP Business Awards recognise the significant contribution that physicists and physics makes in industry across all sectors and at all stages, from start-up businesses, small and mediums sized enterprises to large corporate organisations. They celebrate entrepreneurship, excellence in innovation and the successful implementation of physics into a product or service.

Ralf Kaiser, Founder and Managing Director of Lynkeos Technology Ltd, and professor at the University's School of Physics and Astronomy, said:  “We are proud and honoured to receive this prestigious IOP Award, which rewards the efforts of the Lynkeos team to turn basic science into a game-changing product."

Lynkeos Technology Ltd. is the first company in Europe to commercialise cosmic muon tomography. It was founded in 2016, following an intense 7-year research project carried out by the University of Glasgow and the National Nuclear Laboratory.

Muons are elementary particles, similar to electrons but heavier, that are produced in particle showers in the atmosphere by high-energy cosmic rays. There are about 100 muons per second per square metre at sea level and the typical muon energy is about 10,000 times the typical energy of an X-ray. This means that muons are highly penetrating, ubiquitous, natural and cost-free.

The Lynkeos Muon Imaging System uses cosmic-ray muons to provide a 3D image of the object inside the system. Detectors above and below the object track the path travelled by the muons and sophisticated software algorithms analyse the collected data.  This is similar to an X-ray CAT scan, except that no artificial radiation is used.

The result is an image of the contents of shielded containers, e.g. for nuclear waste, that cannot be imaged by conventional X-ray or gamma-based imaging techniques.  It does not only allow for a visualisation in 3D, but it also allows to distinguish between different materials.