‌The University of Glasgow today (Monday, 8 October) marked the 150th anniversary since work began on the construction of its Gilmorehill campus by laying a foundation stone at the site of the new £90 million James McCune Smith Learning Hub. 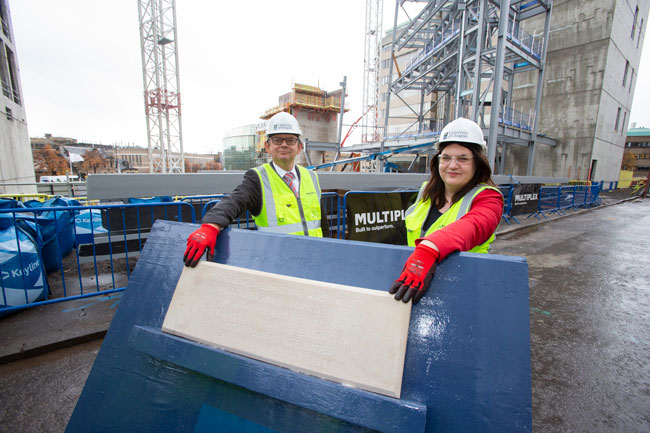 The stone was laid by the Leader of Glasgow City Council, Councillor Susan Aitken, 150 years to the day since the original foundation stone ceremony at the iconic Gilbert Scott Building, on 8 October 1868.

The James McCune Smith Learning Hub will be a specialist learning and teaching facility, offering state of the art flexible learning spaces and technology-enabled teaching resources for over 2,500 students.

It is named after James McCune Smith, the first African American to receive a medical degree, graduating from the University of Glasgow with an MD in 1837.

The James McCune Smith Learning Hub is the first building to be constructed through the University’s £1 billion Campus Development programme, which is redeveloping a five hectare site on the location of the former Western Infirmary in Glasgow’s West End.

Professor Sir Anton Muscatelli, Principal and Vice-Chancellor of the University of Glasgow, said: “It is fitting that 150 years to the day after the University marked its move to Gilmorehill, we are celebrating the next chapter in our history – the start of construction on our £1 billion campus development programme.

“This will be the largest expansion of the University’s estate since it moved to Gilmorehill and will create a rich and exciting mix of teaching, research and public spaces. Alongside world class new buildings, which will boost the University’s teaching and research profile, we are creating a more accessible campus which will better link Byres Road with the cultural quarter around Kelvin Hall and the Kelvingrove Museum.

“I am delighted that the first building in this ambitious plan will provide state-of-the-art learning facilities for our students, and in doing so will honour one of our most pioneering alumni in James McCune Smith."

'A facility that's going to be fantastic not only for ourselves but also for the whole country.' - @UofGVC #Gilmorehill150 pic.twitter.com/HlSbOs9RQJ

The Leader of Glasgow City Council, Councillor Susan Aitken, said: “Today marks another milestone in the continuing partnership between Glasgow University and Glasgow City Council but more importantly it is a crossroads of this great Scottish institution’s past and future.

"The University and the City Council have many shared ambitions and agendas, not least the city’s well-being and prosperity. Together we have developed and promoted Glasgow’s international reputation as centre for knowledge and learning and the James McCune building will significantly. I must also congratulate the university in its choice of name.

"By celebrating the first African American medical graduate from Glasgow during Black History Month it is at the forefront of the discussion Glasgow must have about addressing its slave economy past.”