From world-leading scientific breakthroughs, to becoming a centre of excellence for Leukaemia, the Paul O’Gorman Leukaemia Research Centre is internationally recognised for its pioneering cancer research.

This week the centre, which is part of the University of Glasgow and affectionately known as POG, celebrates its 10th birthday by hosting an international symposium on leukaemia research.

The event will also mark the official announcement of the ‘Professor Tessa Holyoake Memorial Fund’, which was established with a bequest of £100,000 from the late Professor Tessa Holyoake, the founding director of POG, who died last year. The Howat Foundation will match the bequest made by Professor Holyoake, and the funding will be used to support PhD studentsas well as postdoctoral and early career researchers at POG.

The symposium, which takes place today in Glasgow, features lectures from leukaemia experts from around the world, as well as talks by world-leading POG scientists.

POG is part of the university’s Institute of Cancer Sciences. The centre has a range of leukaemia expertise but is particularly renowned for its world-leading work into the understanding and treatment of Chronic Myeloid Leukaemia (CML). 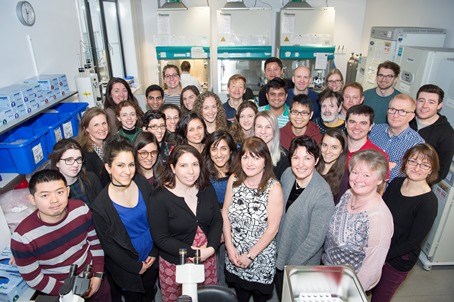 Professor Mhairi Copland, director of POG and Professor of TranslationalHaematology, said: “We are delighted to be celebrating POG’s 10th birthday. POG is rightly recognised as an international centre of excellence in CML and other leukaemia research.

“In the last ten years POG has grown in stature and reputation to become a key part of the international leukaemia research community.  The incredible team here are now focused on maintaining that reputation, and are passionate about continuing our world-leading research, both in our labs and in a number of exciting upcoming clinical trials.

“I would also like to take this opportunity to thank all the staff, partners, funders and friends of POG who, not only made the building and establishment of the centre possible, but who also continue to support the world-leading work we do here through their various fundraising initiatives.”

Dr Malcolm Howat from the Howat Foundation said: “It speaks volumes that Professor Holyoake left a £100,000 bequest to the POG in her will. As a long term supporter of Tessa’s inspirational research, we are pleased to match Tessa’s bequest and support the Professor Tessa Holyoake Memorial Fund to help continue the invaluable research work carried out by the POG.”

POG was officially opened on the 22nd of May 2008 by Dr Richard Rockefeller. It was built after a fundraising drive by the University of Glasgow in collaboration with Bloodwise (formerly Leukaemia & Lymphoma Research), which saw more than £2.6million raised in six years, through the commitment and generosity of more than 1800 donors and supporters.

The facility, which is home to an interdisciplinary research team, is state of the art and incorporates the latest research technologies required to perform basic, translational and clinical research. The Centre also benefits from close interactions with the Beatson Institute for Cancer Research, the Wolfson Wohl Cancer Research Centre and clinical departments of the Beatson West of Scotland Cancer Centre.

The major focus of the Centre is the haemopoietic stem cell which, if damaged  can cause many different forms of leukaemia. POG’s aim is to perform basic research to identify novel therapeutic targets for leukaemia and translate our laboratory findings into new effective medicines for patients.