Too much screen time associated with heart disease and cancer

Time spent watching TV or looking at a computer screen during leisure time – termed discretionary screen time – has been associated with higher risk of mortality and cardiovascular disease in a new large-scale study. 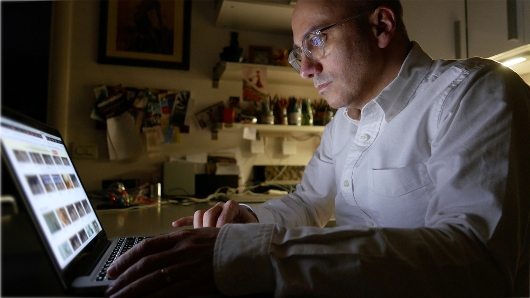 The research, led by the University of Glasgow and published today in BMC Medicine, has revealed a strong association between discretionary screen time and adverse health outcomes, particularly in those with low fitness, low muscle strength or physical activity levels.

Discretionary screen-time is an important contributor to overall sedentary behaviour, which is associated with higher risk of mortality and cardiovascular disease.

This is the largest single study to focus on this area. The researchers looked at 390,089 participants from the UK Biobank and analysed the amount of discretionary screen time. They found that the association between a high level of discretionary screen time and adverse health outcomes, was almost twice as strong in those with low fitness levels or low grip strength.

In contrast, the potential adverse associations of high levels of discretionary screen time were much smaller in those who had the highest levels of fitness and grip strength.

Professor Jason Gill, one of the lead authors of the study, said: “Our study shows that the risks associated with sedentary behaviour may not be the same for everyone, with the association between leisure time screen use and adverse health outcomes being strongest in those with low levels of physical activity, fitness or strength.

“This has potential implications for public health guidance as, if the findings are causal, these data suggest that specifically targeting those with low fitness and strength to reduce their sedentary behaviour may be an effective approach.”

The researchers also found that higher levels of screen time were associated with a higher risk of all-cause mortality, as well as a higher risk of both heart disease and cancer. The findings were independent of physical activity, grip strength, BMI, smoking, diet and other major confounding factors, including socio-economic status.

Dr Carlos Celis, the first author of the study, said: “If the discretionary screen time health associations we found in this study are causal, it suggests that people with the lowest levels of strength, fitness and physical activity could potentially gain the greatest benefit from health promotion interventions aimed at reducing sedentary behaviours.”

“While fitness testing can be difficult to measure in healthcare and community settings, grip strength is a quick, simple and cheap to measure so could easily be implemented as a screening tool in a variety of settings.”

The study, ‘Associations of discretionary screen time with cardiovascular disease and cancer incidence and mortality could be attenuated by strength, fitness and physical activity in the UK Biobank cohort’ is published in BMC Medicine.