The idea that it might be possible to be overweight or obese but not at increased risk of heart disease, otherwise known as the “obesity paradox”, has been challenged by a study of nearly 300,000 people published in in the European Heart Journal. 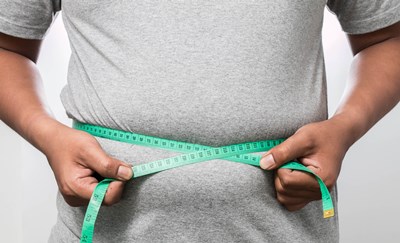 ‌This latest research shows that the risk of heart and blood vessel problems, such as heart attacks, strokes and high blood pressure, increases as body mass index (BMI) increases beyond a BMI of 22-23 kg/m2. Furthermore, the risk also increases steadily the more fat a person carries around their waist.

The study was conducted in 296,535 adults of white European descent who are taking part in the UK Biobank study, and who were healthy at the time they enrolled with the study. UK Biobank recruited from 2006 to 2010, and follow-up data on participants were available up to 2015 for this latest analysis.

Researchers at the University of Glasgow led by Dr Stamatina Iliodromiti, a clinical lecturer in obstetrics and gynaecology and MRC Fellow, found that people with a BMI between 22-23 kg/m2 had the lowest risk of cardiovascular disease (CVD). As BMI increased above 22 kg/m2, the risk of CVD increased by 13% for every 5.2 kg/m2 increase in women and 4.3 kg/m2 in men.

Compared to women and men with waist circumferences of 74 and 83 cm respectively, the CVD risk increased by16% in women and 10% in men for every 12.6 cm and 11.4 cm increase in waist circumference for women and men respectively. Similar increases in CVD risk were seen when the researchers looked at waist-to-hip and waist-to-height ratios and percentage body fat mass – all of which are considered reliable ways to accurately gauge the amount of fat a person carries, also known as adiposity.

Although it is already known that being overweight or obese increases a person’s risk of CVD, as well as other diseases such as cancer, there have also been studies that have suggested that, particularly in the elderly, being overweight or even obese might not have any effect on deaths from CVD or other causes, and may even be protective, especially if people maintain a reasonable level of fitness. This is known as the “obesity paradox”.

However, the authors say their results refute these previous, conflicting findings. “Any public misconception of a potential ‘protective’ effect of fat on heart and stroke risks should be challenged,” said Dr Iliodromiti.

She continued: “This is the largest study that provides evidence against the obesity paradox in healthy people. It is possible that the story may be different for those with pre-existing disease because there is evidence that in cancer patients, for instance, being slightly overweight is associated with lower risk, especially as cancer and its treatments can lead to unhealthy weight loss.

“By maintaining a healthy BMI of around 22-23 kg/m2, healthy people can minimise their risk of developing or dying from heart disease. In terms of other adiposity measures, the less fat, especially around their abdomen, they have, the lower the risk of future heart disease.”

However, the researchers recognise that it can be difficult for some people to maintain a BMI of 22-23 kg/m2,particularly as they get older. Co-author, Naveed Sattar, Professor of Metabolic Medicine at University's Institute of Cardiovascular and Medical Sciences, said: “We know many cannot get to such low BMIs so the message is, whatever your BMI, especially when in the overweight or obese range, losing a few kilograms or more if possible, will only improve your health. There are no downsides to losing weight intentionally and the health professions needs to get better at helping people lose weight.”

The researchers say their findings may have implications for guidelines on preventing and managing cardiovascular disease.

“Even within the normal BMI category of between18.5-25 kg/m2, the risk of CVD increases beyond a BMI of 22-23 kg/m2. The other adiposity measures show that the leaner the person the lower the risk of CVD, and this must be a public message, that healthy individuals should maintain a lean physique to minimise their risk of CVD,” concluded Dr Iliodromiti.

The researchers suggest that the previous confusion over the “obesity paradox” may be due to many factors that can confound results of studies. For instance, smoking changes the distribution of fat in the body, smokers may have lower weight as smoking depresses appetites and so BMI tends to be lower. Another reason could be that some people have existing but undiagnosed disease, which can often lower their weight but also makes them more likely to die prematurely.