University of Glasgow physicists are celebrating the latest groundbreaking observation from the ATLAS collaboration at CERN in Geneva: the observation of Higgs bosons produced together with a top quark pair.

The observation of this extremely rare process was announced today (Monday 4 June 2018) at the Large Hadron Collider Physics 2018 conference in Bologna, Italy. 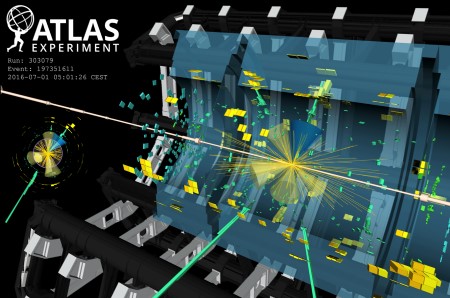 ATLAS’ observation will allow physicists to test critical parameters of the Higgs mechanism in the Standard Model of particle physics.

Researchers from the University of Glasgow’s School of Physics and Astronomy have long played a key role in particle physics experiments at ATLAS, contributing to areas including hardware and software development, physics studies, data-taking and analysis.

Dr Mark Owen of the School of Physics and Astronomy was convenor of the ATLAS top quark physics group from 2014 to 2016 and helped coordinate part of the work which went into this latest discovery. He said: “This is a remarkable discovery, demonstrating experimentally that the Higgs boson does indeed couple to the top quark – the heaviest known elementary particle.

“Along with my colleagues Tony Doyle, Sarah Boutle and a number of students, we have been deeply involved in the analysis where the Higgs decays into a pair of b-quarks, which is one of the five Higgs decay modes used for this discovery. The discovery relies on the great performance of the ATLAS detector, including the inner tracking detector used to identify b-quarks, which was partially constructed in Glasgow. Along with colleagues around the world, we are now all looking forward to analysing the data that ATLAS is currently collecting and being able to learn more about the connection between the Higgs boson and the top quark”

ATLAS spokesperson Karl Jakobs said: “This measurement constitutes a landmark achievement in the exploration of the Higgs mechanism and the interaction of Standard Model particles with the Higgs boson. It provides direct evidence that the heaviest known particle, the top quark, interacts with the predicted large strength with the Higgs boson.”

The signal for this production has slowly built up over years of accumulating data, with first evidence reported by ATLAS last December.

As only 1% of all Higgs bosons are produced in association with top quarks, its observation was extremely challenging. ATLAS physicists examined five years of collision data to arrive at this result.

Fabio Cerutti, ATLAS Higgs working group convener, said: “This was one of the most demanding searches ever carried out by the ATLAS Collaboration, requiring a concerted effort from several analysis teams.

“As it is such a rare process, we had to look across many different Higgs boson decay channels. Some of these were limited by experimental uncertainties, while others by the quantity of the data we collected. It was only by combining all of these different analyses that we could achieve this observation.”

The new result may also provide insight into one of the most puzzling aspects of the Standard Model: the wide range of masses among fermions, the class of particles that include quarks and leptons, and that constitute matter. Understanding the nature of the top quark mass would go a long way to solving this open question.

Fabio Cerutti added: “The measurement gives a strong indication that the Higgs boson has a key role in the large value of the top quark mass. While this is certainly a key feature of the Standard Model, this is the first time it has been verified experimentally with overwhelming significance.”

The success of this result hints at the new analysis possibilities of the ATLAS experiment.

Thanks to the wealth of data being produced by the Large Hadron Collider (LHC) and the excellent performance of the ATLAS experiment, physicists will be able to study the Higgs boson in further rare and experimentally challenging interactions for the first time. Such studies will continue to challenge the limits of the Standard Model and may open new avenues of discovery.

“The full power of the entire dataset collected during Run 2, including those taken until the end of this year, will be used in the future to improve the precision of this result and to look for smaller deviations with reduced experimental uncertainties,” concluded Jakobs. “A combination of all Higgs boson measurements at the end of Run 2 will be important and exciting.”