A new online resource on the popular political culture of Scotland in the 19th and early 20th centuries will be officially launched today, (Thursday 15 February 2018).

The People’s Voice website, created by staff at the Universities of Glasgow and Strathclyde and funded by the Carnegie Trust, contains over 1000 poems, song recordings, essays and school resources.‌ 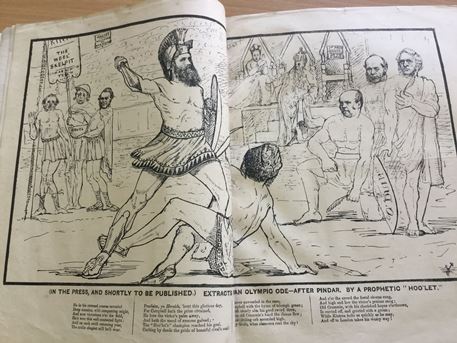 Image reproduced with permission from The Heritage Centre at Paisley Museum

The two year project called The People’s Voice: Scottish political poetry, song and the franchise, 1832-1918 relates to the poetry and song of local communities across Scotland and has unearthed a wide range of materials that speak of protest, citizenship and rights.

Dr Catriona Macdonald, who led the project team and is a Reader in Late Modern Scottish History at the University of Glasgow, said: “After more than two years of work we are delighted to launch this project for everyone to use and learn from.

“The themes that come through the poems range from the local to the national to the international and show Scots of all classes and political persuasions engaged in the political process. Instead of platform speeches and manifestos from ‘the great and the good’, here we have ordinary Scots rhyming in to poetry their concerns and their aspirations. It shows that poetry was – and is – a political medium.”

The project, which received a major grant from the Carnegie Trust for the Universities of Scotland in 2015, aimed to examine the neglected impact that local poetry and song cultures had in Scottish popular politics in the Victorian and Edwardian eras.

To achieve a detailed understanding of these roles, the project focuses on the four successful campaigns to extend the electoral franchise in 1832, 1867/8, 1884 and 1918, and plots these campaigns within broader historical narratives.

A key aim of this project is to disinter many of the poems and songs that appeared in Scotland’s periodical press in this period. Although these publications were common sites in which local poets published, and nurtured lively song cultures, they have not yet been adequately explored by literary critics or historians. To remedy this, the project assessed archival holdings across various localities in Scotland, including Aberdeen, Ayrshire, Dundee, Edinburgh, Glasgow, Paisley and Stirling.

Several resources, including schools resources which have been developed in partnership with Education Scotland, have been created to promote the study of political poetry as a source for History, Literature and Modern Studies.
An edited, online anthology of 50 selected poems will be available through the People’s Voice website, accompanied by a searchable database of every relevant poem found in the select archives, and explanatory essays.
The new resource will be officially launched at The People's Voice: Scottish Political Poetry, Song and the Franchise, 1832–1918 conference.