University of Glasgow Vice Principal and Head of the College of Medical, Veterinary and Life Sciences, Professor Dame Anna Dominiczak is named as one of the experts appointed to advise the Scottish Government. 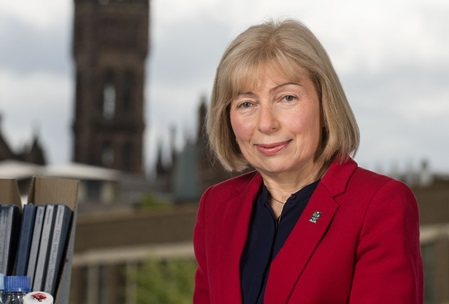 The Scottish Science Advisory Council (SSAC) has announced today that it will appoint five new members to its expert panel, which supports the Chief Scientific Adviser for Scotland in her work with Scottish Ministers. The new members will join the SSAC from 1 January 2019.

The new members will serve for three years, until 31 December 2021.

Professor Dame Anna Dominiczak said: “I am delighted to be chosen as one of five new members of the Scottish Science Advisory Council. It is a great honour to be considered an expert in one’s field.

“Alongside my fellow appointed colleagues, I very much look forward to being part of the council and hope to help support the Chief Scientific Adviser to the best of my ability, providing expertise and judgement that is of value to the Scottish Government.”

Commenting on the new appointments, SSAC Chair Professor Paul Boyle said: “I’m delighted that our new members bring a range of knowledge, skills and networks to help our work in advising the Scottish Government. I look forward to working with all of our new members as we continue to offer a broad range of science advice to support Ministers.”

Science Minister Richard Lochhead welcomed the appointments: “The SSAC plays a vital role in ensuring ministers have access to the very best scientific advice to help inform all policy areas. Members of the SSAC are continuing our great history of science and innovation and I look forward to meeting the new and existing members to discuss how the SSAC can add value to our work.”

Professor Dame Anna Dominiczak is Regius Professor of Medicine, Vice Principal and Head of the College of Medical, Veterinary and Life Sciences at the University of Glasgow, as well as an honorary consultant physician and a non-executive member of NHS Greater Glasgow and Clyde Health Board.

She is one of the world’s leading cardiovascular scientists and clinical academics, awarded a DBE for services to cardiovascular and medical science in 2016. Her research interests include hypertension, cardiovascular genomics and precision medicine, where she is an active champion of the triple helix approach of public, private and academic collaboration. She is a Fellow of the Royal College of Physicians, the American Heart Association, the Academy of Medical Sciences, the Royal Society of Edinburgh, the European Society of Cardiology and the Society of Biology.

Professor Dominiczak has served extensively on national and international research committees and advisory boards, including those of the Academy of Medical Sciences, the Royal Society of Edinburgh and Wellcome Trust.
She is Chair of the Medical Research Council’s (MRC) Translational Research Group, a member of the MRC’s Strategy Board, a member of the Medical Schools Council Executive and Chair of the Equality and Diversity Working Group of the Medical, Dental and Veterinary Schools Councils. She is also a Trustee of the British Heart Foundation.

The SSAC provides independent advice, through its Chair, to the Chief Scientific Adviser (CSA) for Scotland, to inform policy development and delivery across all areas of the Scottish Government’s work.

The SSAC supports the work of the CSA Scotland, Professor Sheila Rowan, the Chief Scientist (Health), Professor David Crossman, and the Chief Scientific Adviser for Environment, Natural Resources and Agriculture, Professor Andrew Millar, all of whom are also ex-officio members of the SSAC.